Keeping With the Japanese theme of this week's posts, here's another one of the "cards with character" that sits in my dupes box: 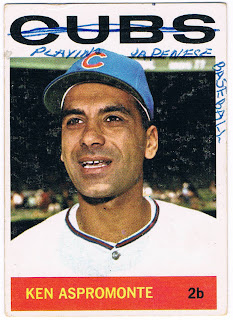 1964 Topps card #252, Ken Aspromonte
This would be the final Topps card for Ken Aspromonte until 1972, when he was the manager of the Cleveland Indians. After playing for the Cubs in 1963, he would play the 1964 season for the Chunichi Dragons.

The original owner of this card made the necessary notation that Aspromonte was no longer a Cub for 1964. He even misspelled "Japanese."

In my last post, I mentioned Hawaii-born Wally Yonamine as the first American-born player in the Japanese League (which is formally called Nippon Professional Baseball), when he went over there in 1951. However, as a player whose ancestry was Japanese, he was better accepted there than non-Asian Americans may have been that soon after the end of World War Two. By the end of the 1950s, a handful of foreign-born players -- known as gaijin, a term that is now sometimes considered disrespectful -- also made their way to Japan. At first, many were either Nisei (Americans of Japanese descent) or former Negro League players. In 1953, Leo Kiely would be the first former major league player there.

By the 1960s, enough American players had come over to force the NPB to limit the number of gaijin on any team to three. For many, the Japanese League was a way to keep playing after they could no longer make a big league club. Don Newcombe, Larry Doby and Aspromonte were among those players. Eventually, younger players would opt to go to Japan...and Japanese players would complete the circle. Though Japanese players weren't a constant presence in the majors for 30 years, the first would take the mound in 1964: 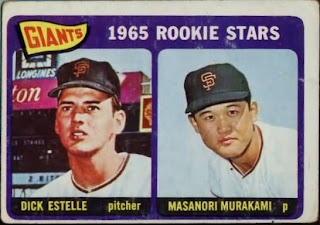 1965 Topps Card #282 -- Giants Rookie Stars
Masanori Murakami pitched for the Giants from 1964-'65 before returning to Japan, where he continued to pitch through 1982. His American playing days saw a contract dispute...not between him and the Giants, but between the Giants and his team in Japan that was so contentious commissioner Ford Frick had to settle it. In the end, Murakami went back, but not because of disputes or homesickness or anything having to do with America. He made a promise to the owner of his team in Japan that he would return, and it would not have been honorable to go back on his word.
Posted by Chris Stufflestreet at 8:30 AM