With Thanksgiving coming up his week, it's time for a football card article.

Who was Michael Schechter? He was the chief executive of Michael Schechter Associates, which handled a variety of promotional objects featuring professional athletes, including sports cards. While many longtime collectors might not recognize the name, they will know his products. From the mid 1970s through the 1990s, his name (as well as MSA) was mentioned a number of times in the hobby press.

If you've been collecting long enough, you're bound to run into one of MSA's products. During those years, many generic-type cards -- many showing similar pictures -- filtered into the hobby as a way of promoting businesses, products and services. There was one small issue that often frustrated some collectors, though: the cards were always airbrushed to remove logos and distinctive insignia. MSA was in the business of making cards.  They acquired the necessary licenses from the different players' unions that gave them permission to use their images, but decided to keep costs down by not getting licenses from the leagues.

While many baseball fans might have dismissed those logo-free designs, 1970s football fans didn't have a lot to complain about. Their major card company was Topps also prevented from featuring logos on their cards at the time. MSA released a series of discs in 1976 featuring baseball players that were sold through a number of stores and items, and later that year they issued a similar set featuring football players. 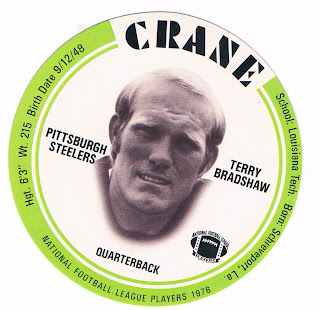 These were sold along with Crane's potato chips (one major sponsor of the '76 baseball discs). A basic head shot, with the necessary info (name, team, position) in the white area and the rest (vital statistics, etc.) in a green ring around the edge. You'll notice the NFLPA logo inside the circle and a copyright line at the bottom.

Here's another, featuring the same player: 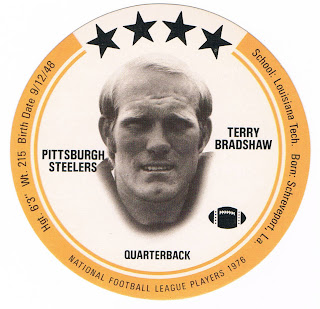 While much of the information is retained, there are a couple of differences here. First, the ring around the disc's edge is now orange, and the "Crane" logo has been replaced with stars. This was for discs sold through other means. This Bradshaw is from Buckman's ice cream store in Rochester, New York, while another set was sold through a place called "Saga." I don't have any Saga discs yet, but they were evidently issued in a promotion involving school lunches in the Philadelphia area.

The discs are easily identified through their backs. Crane's discs have the same logo used on the 1976 baseball discs: 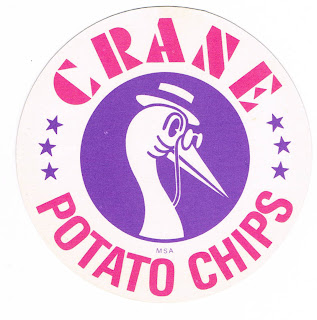 If you look closely, you'll see the MSA lettering just below the goose in that picture. (It has been pointed out that I should understand the bird is a crane...something I probably could have figured out without any help.)

The Buckman's discs also have the MSA lettering, along with an advertisement for the business: 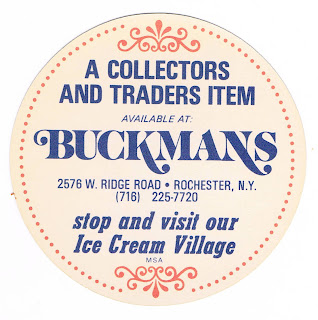 While Crane's discs aren't hard to put together, the more limited distribution of Buckman's and Saga discs make them harder to find, with Saga being much more scarce than the others. It's also worth noting that the checklists are slightly different among the sets: Terry Bradshaw appears in all three, but Joe Greene appears in the Crane and Saga sets but not Buckman's, which has a Franco Harris disc instead.
Posted by Chris Stufflestreet at 8:30 AM