"I have a variation for you that doesn't  seem to be in the available checklists. The 1963 Topps #473 New York Mets team card has both a red bar and orange bar version. 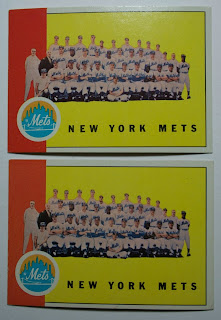 (In the attached scan, it's worth mentioning that the Mets
logo has the same shade of orange on each card.)
There seems to be a fair division between the two based on the eBay listings where it's pretty easy to distinguish between them.
Now maybe some will say that this is just a printing artifact and shouldn't be recognized as a true variation. However, the orange or black color of a much smaller bar on the 1956 Topps 5¢ wrapper makes quite a big difference in its value to collectors.

I wonder if similar variations exist among other cards in this set."

I happen to be one of those hobbyists who considers these cards printer-caused variations rather than one caused by an error, recropped picture, etc. While I don't begrudge others for collecting that way, I don't usually get excited about flaws in the printing process that cause slight color variations. In my way of seeing it, a company can make an unlimited number of variations simply by altering the process.

Oh, wait. The companies do that now with their "parallel" sets. I guess that's just the purist in me that thinks it's a ridiculous thing. But, I digress...

With 1963 Topps, the color scheme -- especially with blue and red -- called for a more intense shade than usually found on cards. When you find a card with bright colors, they look great...and the lack of lower borders make them stand out even more. However, at certain times in the print run, the colors weren't as bold because the ink used was running low (or had a different mixture) and the bright red resembled an orange...or the bright blue was more of a sky blue. A similar effect happened with T210 cards from 1910...While the design had bright red borders, the 3rd series had several cards that appeared to have orange borders (just like your Mets card has) due to a shortage of the ink used that lessened the intensity of the border color.

That's one of the great things about this hobby...there's plenty of room here for all types of collectors. I'm a curmudgeon on this point, but there are others who are a lot more open and knowledgeable.
Posted by Chris Stufflestreet at 8:30 AM