"I happened to come across a set of Berk-Ross cards. It is the 4th set 1 thru 18. All 9 of the panels are intact and are in what i would guess in ex/m shape with only a small trace of corner wear. The holder is still intact although the back flaps are soft. i am attaching some photos so you can get a look at them. I understand that with all the panels still intact they are worth more. I'm trying to get a ball park guess at the value of this set would be. Could you possibly give me an idea of what you think they are worth?" 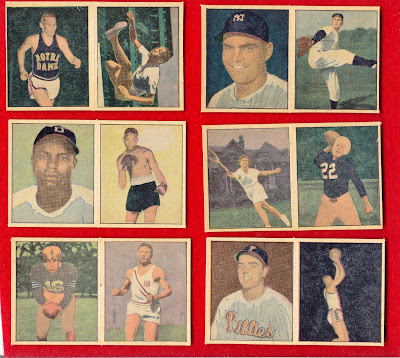 A:
In 1951, Berk Ross cards came out as a series of 2-card panels, each belonging to a series. There were 72 cards but each was numbered 1-1 through 1-18, 2-1 through 2-18, 3-1 through 3-18 and 4-1 through 4-18. Each series had 10 baseball players but as you can see from the image above, various other sports were represented as well.
My website has a page on the 1951 Berk Ross set that has a checklist of all 72 players in the set.
The most notable players in series 4 are Whitey Ford and Robin Roberts, neither of whom show up in the image above. They came in packages that looked like the one Dan has: 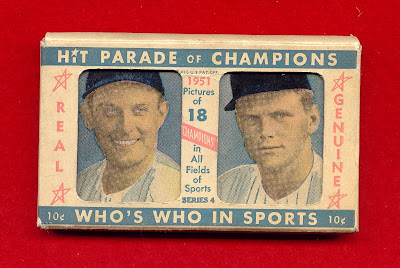 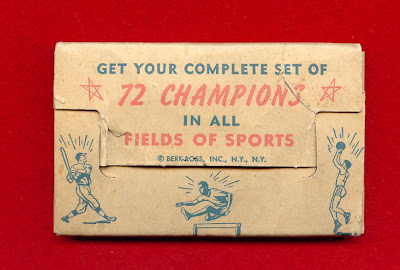 It's nice to see that some packs survived nearly 60 years, without having the panels separated and the boxes that held them tossed away.
The cards still show up on eBay from time to time as part of complete packages. For whatever reason, Series 4 seem to be the most common of these. Recent auctions have gotten $100-200.

Finally, here's the scan of the backs of those cards shown above. Thanks, Dan, for including these scans with your email. They're great to see. 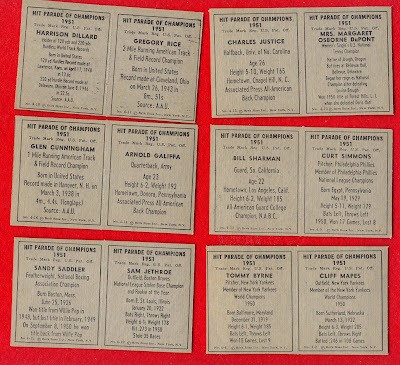 (I'll add this here...Berk Ross was only a card-making company for two years, but has lived on thanks to hobby message boards. A few years back, somebody went on the CU board -- run by the PSA people -- and asked for some Yogi Berra cards other than what were found in the mainstream sets. Somebody asked if he was interested in a 1952 Berk Ross.


"No, thanks, I'm only interested in Yogi Berra," was the answer. It still gets brought up on several message boards, not just at CU. Since it's taken on a life of its own, some collectors think more of that moment when Berk Ross is mentioned than from the cards themselves.)