Many collectors who busted packs open in the 1950s and 60s will remember cards like this one: 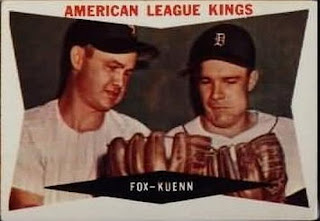 (Kuenn looks like he's about to spit that tobacco into Fox's glove...perhaps it helped with the grip.)
Every year between 1957 and '69 (except for '65) saw some of these cards inserted into the sets. They sometimes had names that looked neat on the checklists, like "Fence Busters" and "Sophomore Stalwarts." Sometimes they featured teammates, others had stars meeting up during All-Star festivities or showed a coach giving wisdom to a young player.

The first Topps card featuring multiple players appeared in 1954, when two brothers from the Pirates shared the spotlight together: 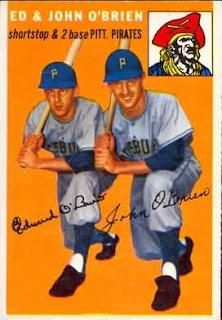 (Makes you wonder if Topps's print setter forgot which one was which.)
But -- despite the worship by hobbyists over all things Topps -- they weren't the first company to come up with the concept of placing multiple players on a single card. Yes, there were sets like 1941 Double Play that used a two-player design on all their cards, but those don't count. One set that was almost entirely devoted to single-player cards but featured a few dual-player cards was 1934-'36 Batter Up.

When National Chicle issued the Batter Up sets between 1934 and '36, they included three cards featuring two players: 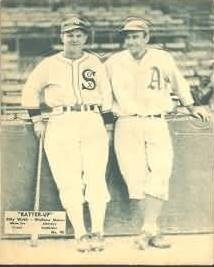 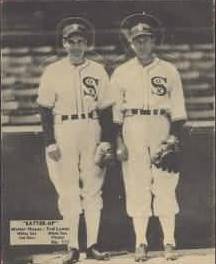 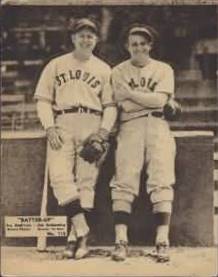 Card #115 -- Ivy Andrews and Jim Bottomley
Yes, these cards were die cut to accommodate both players.

Another set of the era was a premium issue known by hobbyists as R313. They came out in 1936 as wrapper redemptions from National Chicle (the same company that made the Batter Up cards above). Since they were glossy-style photos and came in larger sizes, they could also show more players: 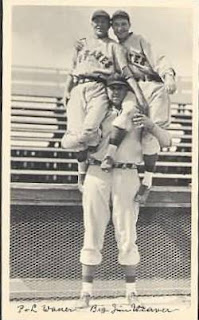 ("Big Jim" Weaver and both Hall of Famer Waner brothers)
R313 cards are known as "Fine Pens" due to the way the facsimile signatures appear; there are also "Wide Pen" cards from the same era, from a set cataloged as R314. They were a product of rival company Goudey.

These cards from the 1930s weren't the first multi-player cards, either. The concept has been around as long as baseball cards have. In fact, even Old Judge cards of the 1880s have some examples: 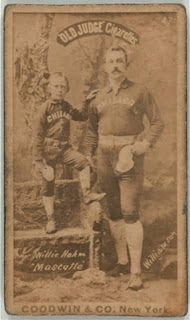 N172 -- Ned Williamson and Mascot
It just goes to prove that old saying that everything comes back around eventually.
Posted by Chris Stufflestreet at 8:30 AM

Email ThisBlogThis!Share to TwitterShare to FacebookShare to Pinterest
Labels: 1934-'36 Batter Up, R313