"I have an American Caramel Company card with name of player in the white border. Is that E-121?  The name is ELMER SMITH ?" 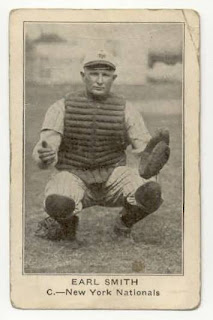 Elmer Smith did appear in the E121 set.

Here's a page that gives a quick description of the set...they mention two different sets based on the back caption, a "Series of 80" and a "Series of 120." While some players appeared in both series, Elmer Smith did not appear in the "Series of 80."
Posted by Chris Stufflestreet at 8:30 AM