Remember Those Who Sacrificed

Today is Memorial Day, a day where we should stop for a moment and reflect upon the sacrifices others made for us. Others who went overseas to do a job and never made it back home.

Last year, I showed off this card from my collection here: 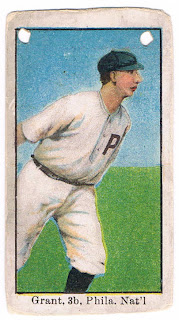 If you look closely at the holes punched into the corners, you'll notice they are in the shape of baseball fields. A long-time collector explained that they allowed the card to have a string run through them, and the card could be worn around the neck. That seems rather odd to do with a card, but there are others who will say that using them to make noise in bicycle spokes is odd as well, so to each his own...

Today is Memorial Day. It's a day where we should stop for a moment and remember the sacrifices our fellow Americans have given to help us enjoy our Freedoms. Some, like Captain Eddie Grant of Massachusetts, gave their lives for the cause. And they should never be forgotten.
Posted by Chris Stufflestreet at 8:30 AM

Email ThisBlogThis!Share to TwitterShare to FacebookShare to Pinterest
Labels: E90-1