A few weeks ago, I was contacted by Jeff, who's a reader of this blog. While looking through my wantlist, he was surprised to find that he had 10 of the cards I needed for my 1978 Burger King Yankees and decided to ask if I'd like to trade for them.

Well, the cards arrived over the weekend and they looked great! One thing I like about BKs is the way Topps was able to go back and fix a few blatant issues. For instance, there's this card: 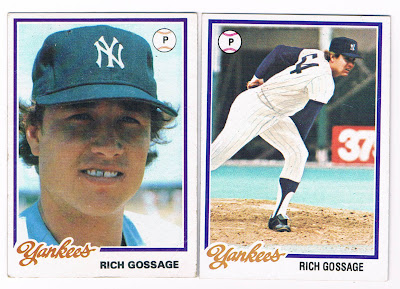 (Before the facial hair grew out...Burger King card on the left, Regular Topps card on the right)
Rich Gossage spent the 1977 season with the Pittsburgh Pirates before being picked up in free agency by the Yankees after the season was finished. Topps had no way to get a picture of him in pinstripes, so they just did a quick airbrush job, as you can see above. For the BK set, they were able to use a picture of him in the correct uniform.

The Yankees Jeff sent me included Reggie Jackson and Thurman Munson, and they were great additions to one of my few sorely needed 1970s cards. In fact, those ten cards put me only three cards away from completing the entire Yankees team set. All I need now are Cliff Johnson, Bucky Dent and Chris Chambliss.

Well, I need to specify...I need a loose Chris Chambliss, since he's already in my collection here: 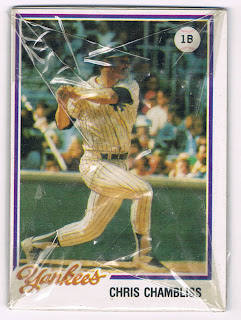 It's an unopened pack, which contains three player cards and a checklist card. As much as I'm tempted to open it up and see who's inside, I keep forcing myself to stop thinking about it.

I've already done entries here for the 1979 BK Yankees as well as the same year's Phillies set. A complete set will not only keep me from wanting to see what's inside the cellophane surrounding Chambliss, but will invariably lead to another installment in the series.

Jeff didn't stop at those BK cards, though. He added more than 50 cards from last year's Topps set (I do have modern needs, which helps me to trade with others whose collections aren't as old as most of mine) and this great card: 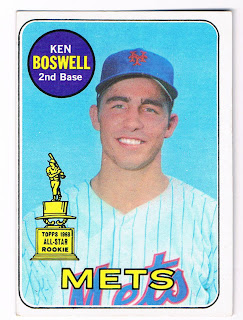 A 1969 Met is always a great addition to my collection. I now am only 41 cards away from completing that set as well.

Thanks a lot, Jeff!
Posted by Chris Stufflestreet at 8:30 AM