When you have a website that gives information about baseball cards, it sometimes leads to emails asking about values. While I generally avoid giving pricing info, this one made me think about how the laws of supply and demand have affected the hobby:

"I have some baseball cards (1989 Donruss in the original box and 1988 Score cards in original plastic wrapping) and I was wondering if you could give me a rough estimate of what they might be worth. I've attached a picture to this e-mail. Thanks!" 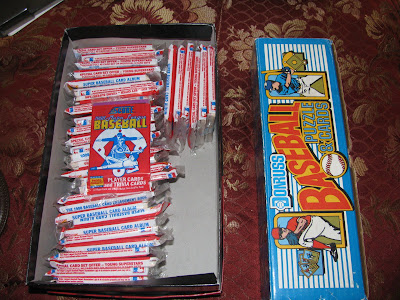 (My rough count tells me there are 36 unopened '88 Score packs in their original cello wrappers in this photo, which is the same amount as an unopened box contains. And that is definitely the box used for the '89 Donruss factory set.)
A:

Sadly, since there is no shortage of unopened late 1980s material, the prices on 1988 Score and 1989 Donruss haven't done well over the years. In 1988, I bought packs of Score for 40 cents (plus New York's then 7% state sales tax) from a family-owned store just around the corner from where I lived. My copy of Baseball Cards Monthly magazine from May 1989 offers a complete '89 Donruss set from several sellers at anywhere between $22.95 and $29 (plus shipping and handling).

Today? Well, according to this site, there is no need to do a "rollback" sale on unopened packs of Score. They're worth about the same amount they sold for 23 years ago. Dozens of boxes sit on eBay with "Buy it Now" prices of $18 (which comes to 50 cents a pack) and stay unsold.

As for the '89 Donruss factory set...this seller is offering them for $11.95, which is less than half what they fetched when they were brand new.

Back in the late 1980s, unopened material from the past sold for a lot of money. It encouraged people to stock cases away in the hope that they would also appreciate in value. However, so many unopened cases were set aside that the supply never had a chance to dwindle from natural attrition. At the same time, kids weren't torturing their cards in 1989 the way kids in the 1950s and 60s did. They weren't flipped against walls or placed in bicycle spokes all that often. Their mothers weren't tossing out their collections when they went to summer camp. And manufacturers were releasing enough cards to allow every man, woman, child and family dog in America to have two of them. At the same time, the prospects in those sets -- Gregg Jefferies, Sam Horn, Mike Greenwell, Al Leiter, et. al. -- didn't turn into Cooperstown-bound legends. And of those who did better (that '89 set contains rookie cards of Ken Griffey, Jr., Curt Schilling and Randy Johnson, who are likely to be first-ticket HOFers), the glut of material has prevented their cards from making the same 20-year gains we saw in the 1980s.

The supply is so high and the demand so low, I'm not sure when -- or even if -- the prices will ever trend upward.
Posted by Chris Stufflestreet at 8:30 AM