So Much For the "Mellow" Decade

(This is the 200th post I've made to this blog. In recognition of this milestone, I am doing a player profile. I may continue to do something like this in the future. Of course, any suggestions that would help me do a little bit of research to make other profiles like this...drop me an email. Now, we return to the regularly scheduled program, already in progress...)

For those of you who were too young to remember the times...

Whenever somebody tells you that the 1970s were a time of mellow relaxation, don't believe it for a moment. Rusty Torres can tell you all about it. He took part in three games in that decade that had to be forfeited as a result of on-field rioting by the fans.

Forfeit #1 -- "Capitol" Punishment From the Fans 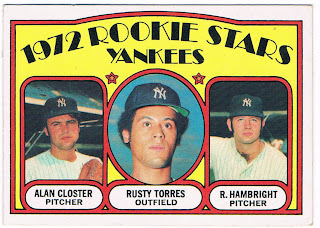 1972 Topps #124 -- Yankees Rookies (Torres's first Topps card)
He was a rookie playing for the New York Yankees in 1971 as a late-season call-up. On the last day of the season, he was playing a game against the Washington Senators. As he stepped up to the batter's box during the ninth inning, fans began swarming out of the stands and grabbing whatever they could take. This was the final game the Senators would play in Washington before moving to Texas and becoming the Rangers.

There was one minor problem: when they stormed the field, the game wasn't yet finished. There were still only two outs and the playing field was rendered useless by the fans. As a result, what was about to become a 7-5 Senators victory became a forfeit to the Yankees.

And Torres didn't have to live with the fact that he might have been the final out of the season.
Forfeit #2 -- Ten Cent Beer Night 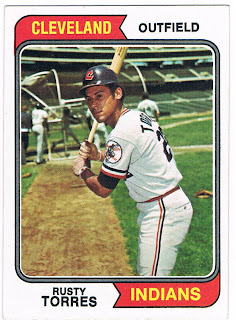 1974 Topps #499
In 1974, Torres was playing for the Cleveland Indians. In the ninth inning of a game on June 4, he came up as a pinch-hitter and banged out a single. With the Tribe down to the Rangers 5-1, he hoped to be part of a rally that could shut the game down. After moving over to second, however, he again watched as fans began climbing over the fences.

This time, the Indians were offering a promotion to entice fans to come to Municipal Stadium by "rolling back" the price of beer to ten cents. It worked. While 8,000 fans would normally come the "The Mistake on the Lake" to watch their Tribe take the field, the promotion drew over 25,000. However, the addition of alcohol only made an unruly crowd become more hostile. The visiting Texas Rangers were having objects hurled at them, hearing obscenities yelled at them and even enduring streakers and mooners. As Torres stood on second base that night, a fan tried to snatch the cap from Ranger outfielder Jeff Burroughs' head. As Billy Martin came out to protect his player -- with other Rangers following behind him and wielding bats -- the crowd came out as well, armed with pieces they ripped from the stadium seats.

In the aftermath, the Cleveland riot police had to be called in to control the crowd. Head umpire Nestor Chylak was injured by flying debris, and eventually declared the game a forfeit.

I'm not too sure that Torres felt glad to be on the home team, since angry mobs tend to forget minor details. 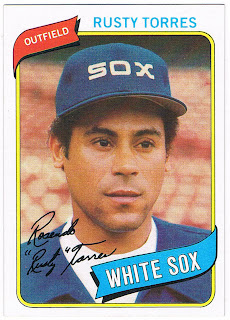 1980 Topps #36 (He didn't appear in the '79 set)
Once again, a promotion was held that unwittingly encouraged rowdy behavior from the fans. Once again, alcohol didn't help matters at all. A Chicago radio DJ named Steve Dahl was one of many across the country who expressed their sheer contempt for disco music. On July 12, 1979, a "Disco Demolition Night" was organized at Comiskey Park and set up to occur between the games of a White Sox/Tigers doubleheader. Fans were let in at a discounted price if they brought a disco record, and the idea was to destroy the records in a bonfire on the field.

The event didn't turn out well. As the events unfolded, the fans once again descended onto the field and began to wreak havoc. Tigers manager Sparky Anderson refused to allow his players on the field and the Chicago police were called in to help. Eventually, the second game was declared a forfeit.

This time, however, Torres wasn't on the field to watch when things were ready to hit the fan. This time, he and his teammates were in the clubhouse preparing for the game.
Posted by Chris Stufflestreet at 8:30 AM