Two weeks ago, I showed off some scarce T-series backs.  As a public service to my fellow hobbyists, here are some more that don't get shown all that often. Sure, there are plenty of sites out there that will show you all the different T206 backs...but these don't get seen all that often: 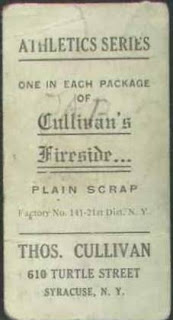 T208 Fireside
This very scarce issue featuring only members of the 1910 World Champion Philadelphia A's seems to have been limited to the Syracuse, New York area. I'm guessing the fact that Jefferson Burdick lived in that city is the major reason this set was catalogued in the first place.

T213-2 Coupon
T213 Coupon cards were issued in three distinct series between 1910 and 1919, each with a different back. This is the second of those backs. Due to the fact that the pictures are the same ones used in the T206 set and the Type 1 cards have a similar text color, these cards are often lumped in with that set. Make no mistake, though...it's a different set and the cards are much more scarce and valuable. 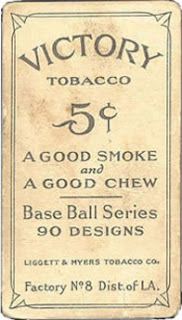 There are several "pockets" where baseball card collectors seem to be clustered. One in the Northeast (Boston-New York-Philadelphia). Another is in the Midwest, while yet another is located out on the West Coast. In a smaller sense, parts of (southern) Florida and Arizona can be included, since so many people from those main clusters retire there.

As for the Deep South, there's really not a large-scale card collecting population. Both Nationals held in Atlanta were considered to be disappointing, and my own experience from having lived in Jacksonville in the past led me to realize that there are more people interested in football and NASCAR there. However, New Orleans saw an awful lot of card issued during the tobacco era, and many of those sets are tough to collect.

In fact, there are still discoveries of previously unknown cards in Louisiana from time to time. I wrote about one such discovery in March. 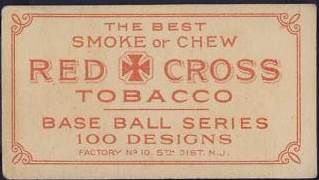 T215 Red Cross
This is a very distinctive back. Today, the cross shown here is better known as the Iron Cross awarded to German soldiers during both World Wars. There were two distinct sets of Red Cross cards, but both featured the same back design. 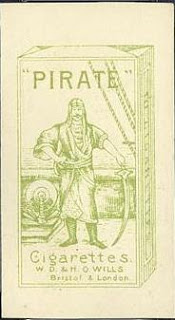 T215 Pirate
This is one of the more puzzling sets found in the T-series. First of all, this wasn't catalogued by Jefferson Burdick in the American Card Catalog; rather, it was added to a later edition after his death. Secondly, the line about the cigarettes being sold in England should preclude it from being included at all, since foreign cards were given other designations. Finally, hobby legend has stated that these cards were available only in the South Seas area (China, Australia, the Philippines, Panama Canal Zone, etc.) to military servicemen a few years before World War I.

However, some advanced collectors have mentioned that the cards are often found in better shape than you'd expect for something that made the trip back in a foot locker; in fact, many are in great shape and appear to be hand-cut. It's been claimed that these cards were never placed into packs (despite the fact that one is pictures on the back), but that's going to be hard to definitively prove.

I still want to know how they got lumped in with Red Cross cards, since they obviously are different sets. 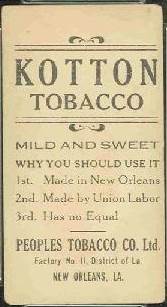 T216 Kotton
These cards are also from the New Orleans area. They hold a couple of distinctions. First, they're among the few sets that feature Federal League players. Second, the set -- issued inside cigarette packages -- includes cards of Honus Wagner...and were issued after his T206 card was famously withdrawn.

There were three brands among T216 cards. Kotton is the more common, but Mino and Virginia Extra can also be found. 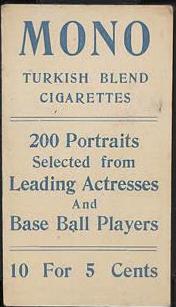 T217 Mono
Finally, here's another set that was limited to a regional area. Mono cigarettes were sold in California, and these cards feature only players from the PCL. Out of the "200 Portraits," only 23 ballplayers have been identified. There must have been a lot of leading actresses in California even then.
Posted by Chris Stufflestreet at 8:30 AM