I mentioned this last week in my other blog, but I really need to share this here for the benefit of those who don't follow that blog...

In certain hobby trading groups, a "Hero" is the name given to a trader who sends along the final card needed to complete a set. Recently, another blogger achieved Hero status by sending this card: 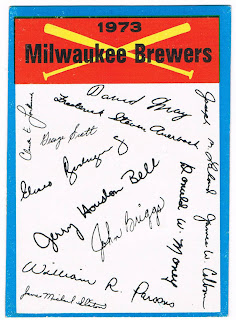 It's a 1973 Topps team checklist. They were inserted in wax packs along with the high-numbered series that year. They're more scarce than a similarly-themed red-bordered checklist series from 1974, which were added to the packs throughout the year.

Thanks to Tony of the 1973 Topps Baseball Set Builder blog for sending this over and letting me fill the last hole in my 1973 Topps binder.

Even though I completed my 1973 Topps base set at the Chicago National a few years ago (the final card was Johnny Callison), I still needed several checklist cards. Last year, when I began writing the 1973 Topps Photography blog I still needed a half dozen of them and hoped I could finish that pesky auxiliary set before I ran out of cards to feature. Now, that's no longer a concern.

However, there are collectors who point out that there are still variations that can be picked up: the various manger cards with different backgrounds behind the coaches' photos, some print variations and the variations with the checklist cards themselves. At this time, I have no intention of chasing a "master" set.

But expect a post in the future on 1973 Topps variations.
Posted by Chris Stufflestreet at 8:30 AM