Truly a Gentleman and a Scholar

So far, here's the only card of a Hall of Famer I currently own from the 1933 Goudey set: 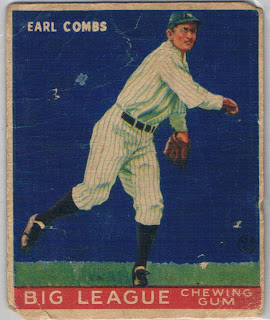 Card #103 -- Earl Combs, New York Yankees
That's right...in a set loaded with Hall of Fame players, I have managed to snag only one of them so far. But a Yankee Hall of Famer is a really good thing.

Earle (Goudey spelled his first name wrong) Combs was a native of Kentucky and well-respected as a Southern gentleman on and off the field. He was the centerfielder and leadoff hitter of the team that featured "Murderer's Row" behind him. After retiring, he stayed with the Yankees as a coach to help his eventual replacement -- a kid from California named Joe DiMaggio -- the nuances of the position at Yankee Stadium.

Before beginning his career as a baseball player, Combs was a school teacher. While teaching in a small one-room schoolhouse in a rural area, he played baseball in his spare time. Eventually, his abilities allowed him to become a ballplayer full-time. While baseball players then weren't paid quite as highly as they are today, it was still a lot more than he made as a teacher.
Posted by Chris Stufflestreet at 8:30 AM

Email ThisBlogThis!Share to TwitterShare to FacebookShare to Pinterest
Labels: 1933 goudey