Little-Known Cards From the South

(I've recently begun a card-related project for another website. I'll explain what that's all about in a later post, but the cool thing is that the process is giving me some neat ideas about entries for this blog. Since anything that helps spread the gospel of old cardboard is a good thing, I have no choice but to go with it.)

Here's a card very few people can identify unless they've been collecting T-cards: 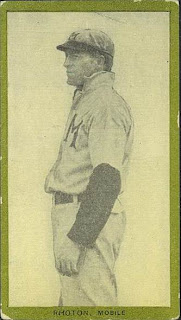 (Not my card...this image was borrowed)
This is known to collectors as a T211, or Red Sun card. It was printed and placed inside cigarette packages in 1910. The "Red Sun" designation is due to this awesome back advertisement for those cigarettes: 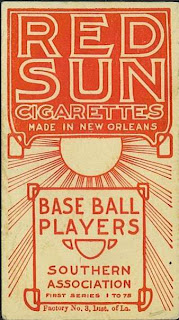 (This is not an advertisement to smoke...Heed the Surgeon General's Warning.)
As the back states, the set features players from the Southern Association, which then included franchises in Birmingham, Atlanta, Chattanooga, Memphis, Mobile, Montgomery, Nashville and New Orleans. As you may be able to see from the small type at the bottom, the card was printed in Louisiana and was distributed mostly in the New Orleans area. As a result of this -- as well as the fact that many card collectors are largely based in the Northeast, Midwest and along the West Coast -- these cards are incredibly scarce. 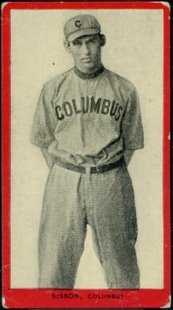 The photograph styles are similar, but the border color is different. This is a T210 card. T210s are also called Old Mill because of their back advertisement or Red Borders for obvious reasons. Many collectors are unaware of this set as well, despite it being the largest single-year issue of any card set before 1969 Topps (yes, there are more cards in it than T206, despite that set having three years to build its numbers). My website has info about the T210 set for anybody who wants to read more. Old Mill, by the way, is familiar to many collectors as one of the brands from the T206 set.

T210s comprised eight different series, each of which spotlighted players from a different minor league in the Southeast. Series 8 was made up of Southern Association players, including "Shoeless" Joe Jackson. Many of the 114 players (but not Jackson) would go on to be featured in the 75 cards of the T211 set as well.

The T210s were distributed in a wider area and are more plentiful than T211s are. However, they're not as plentiful as the T206 and T205 cards that were distributed in the more collector-friendly areas of the country. T210s are a challenge, but T211s are legitimately tough.
Posted by Chris Stufflestreet at 8:30 AM