Today's card isn't a card at all, it's a stamp that came with cards: 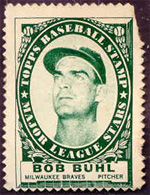 Each five-cent wax pack of 1961 contained two-stamp panels of stamps as an insert. The players were available in two tints: 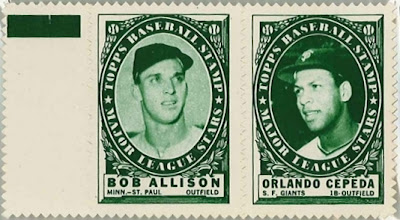 There was a green tint (seen above) and a brown tint as shown below: 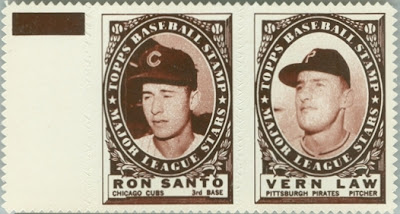 As you can see, the players weren't given a league-specific tint.

There were 207 players in the set. However, that number can't be divided by two, so Al Kaline is found with both tints. That makes 208 stamps in a compete set, which is very affordable for collectors because there's limited interest in non-card inserts. Superstars from the set are able to be picked up for a fraction of their corresponding card from the base set.

Advanced collectors have identified 182 different panel combinations as well. Surprisingly, most complete panels do not have a large premium over the combined price of the two individual stamps. For instance, the panel price for two common players is about a dollar over the stamps' combined value. For stars, however, a premium is more significant because of their collectability.

An stamp album was also available from Topps as a mail-in offer for 10 cents.
Posted by Chris Stufflestreet at 8:30 AM