Today's pictures were sent to me by a fellow collector and show the lengths Topps went to to get rid of its backlog of cards from 1951: 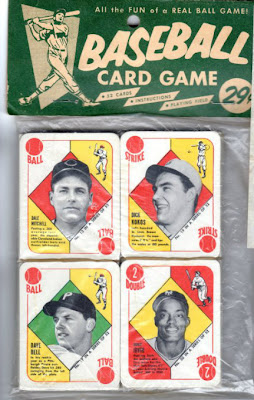 Later in the decade, a full set of Red Backs was "repurposed" into a game, complete with instructions and a playing field. At 29 cents for 52 cards and two pieces of paper, that was about the same price as the cards originally went for in their wax packages (2 for a penny). The plus side was that they didn't come with the awful-tasting taffy product.

The playing "field" is shown on the back: 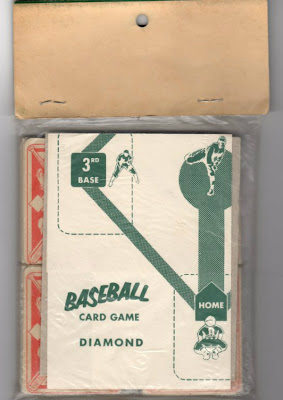 Thanks, Al, for sending the image along. And for keeping the package intact. I know I'd be way too tempted to open it if it was mine.
Posted by Chris Stufflestreet at 8:30 AM

Email ThisBlogThis!Share to TwitterShare to FacebookShare to Pinterest
Labels: 1951 topps