Raining On a Parade

This card is one of the most well-known vintage cards due to its action, especially coming from an era where action shots weren't part of baseball cards: 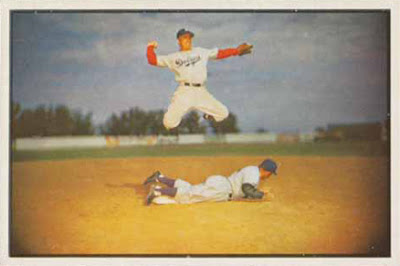 However, when I look at it I see all sorts of wrong things: it definitely isn't a major league field (and looks like a municipal park rather than a Spring Training facility), the player -- rumored to be Phil Rizzuto -- is sliding the wrong way into second and the edges of the photo are underexposed for a set that lauded itself for its full-color photography.

Despite seeming like I've gone into full "Get the Hell off my yard!" geezer mode, I think it should be recognized as one of the first attempts to get some action into card photos. That was gutsy in 1953; even Topps didn't attempt to do that until 1971.
Posted by Chris Stufflestreet at 8:30 AM