Here's another type card I have sitting in my collection: 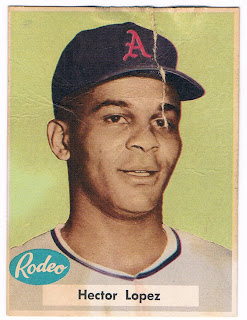 While many of the cards I show here are stained and damaged, this one is often found that way.

It's one of the many regional 1950s sets that was issued with hot dogs and other meat products. When the A's moved from Philadelphia to Kansas City before the 1955 season, a local company called Rodeo Meats did their part in welcoming the team to the town. They included pictures of the city's new baseball team with packages of their hot dogs, which was not an uncommon method then (Wilson's Franks, Hunter's Wieners, Sugardale, Morrell, Kahn's, etc.)

There were 38 players featured in the set, which means they included about every conceivable player from the club, manager Lou Boudreau and his coaches. Among the better-remembered A's players: Enos Slaughter, Johnny Sain, Vic Power, Bobby Shantz and Gus Zernial. There were also some variations in pictures and colors, as well as a error win the spelling of Shantz's last name that was subsequently corrected -- he was called "Schantz" at first even though his brother Wilmer Shantz had his own name spelled right all along -- so there are a total of 47 cards in the complete set.

That was a very large number for a 1950s regional set (most were 20-30 cards in total), but unfortunately, they're pretty scarce because their area of issue was much less populated than most other major league cities. Also, the fact that they were packaged inside of hot dog packages makes them almost always found with some kind of stain, like my example above. High-grade examples of these cards are quite expensive, and even lesser-grade versions are expensive enough to keep many collectors from wanting to try putting the set together a card at a time.

The backs of '55 Rodeo cards featured an offer for a team scrapbook, available for a label from any Rodeo product and a quarter: 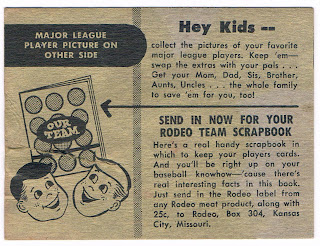 Rodeo issued another set in 1956. That set only included 13 cards, all of which had players and images from the 1955 set. However, they're easy to identify in person, as the scrapbook offer wasn't on the backs of those cards.
Posted by Chris Stufflestreet at 8:30 AM

Email ThisBlogThis!Share to TwitterShare to FacebookShare to Pinterest
Labels: 1955 Rodeo