Player's Been Traded! The 1965 Topps Edition

Thanksgiving is tomorrow, so here are some of the "turkeys" I have in my dupes box from 1965.

As I've written this blog, I've shared some of the cards that show the way kids in the 1950s and 60s dealt with things during the era of one card set per year. When a player was traded, or a new player arrived, those kids weren't about to let something like a monopoly baseball card company get in their way of having a complete team set. With a little American ingenuity and a ball point pen, anything was possible.

First, we have a guy who was traded: 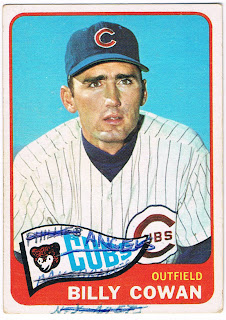 Billy Cowan will be best known to baseball card collectors for the way he posed on his 1972 Topps card, with the halo of the old Angel sign over his head. However, before he posed for that card, he is shown here as a Cub. For whatever reason, he didn't get the "capless" treatment Topps usually gave players who had been traded. He actually began the 1965 season with the New York Mets (which aren't mentioned on this card)  and ended it with the Braves (who are). The card shows his updated status as he played for the Phillies (1967), Yankees (1969) and Angels (1969-'72). 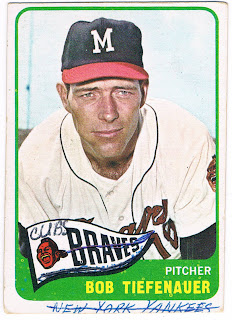 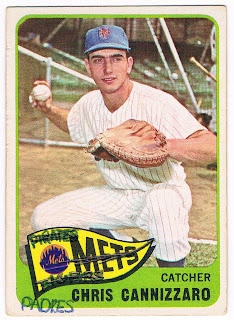 Chris Cannizzaro actually lasted with his team the entire '65 season. Then, he was back in the minors for two years. In '68 he came back up with Pittsburgh, before becoming an original member of the San Diego Padres. While "Tigers" is shown on the card at the bottom of the pennant, Cannizzaro was with the organization during his minor league stint in '66-'67 but likely wasn't needed to back up Bill Freehan. He would go on to play with the Cubs in '71 and the Dodgers in '72, but those aren't reflected here. Looks like the kid had put away his collection sometime after 1969.

In the case where somebody came up to the majors before his card was printed, collectors needed to do something different. Here's an example: 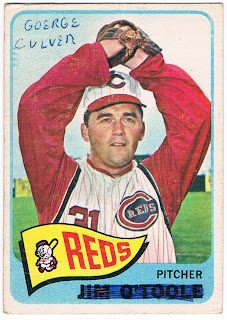 George Culver began playing with the Reds in 1968. Jim O'Toole, on the other hand, was gone after '67. An easy adjustment. 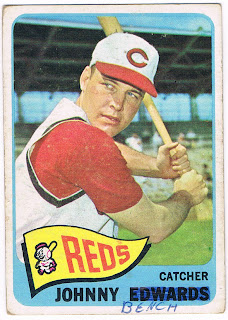 Likewise, when a team trades away a veteran for a hot prospect, like the Reds did after the '67 season...it really helps if both players have the same first name. Bench didn't get his first card until '68 and didn't appear by himself on one until '69, but that wasn't a problem when this was a handy solution.

This last card, though, is a puzzler: 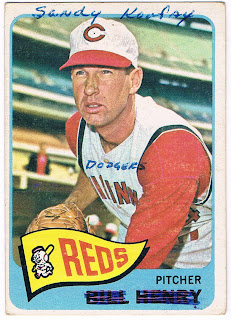 Bill Henry was with the Giants by the close of the '65 season, so I understand the idea of tossing him from the Reds' pile. However, Sandy Koufax was appearing in the Topps set on his own card. Since he appeared on card #300, perhaps it was necessary to "make" a Koufax card to play baseball card "games" with early in the season as a way of waiting until Sandy showed up in the gum packs. Aside from being left-handed and in the National League, there's not a lot of similarity between the two pitchers.

As I said earlier, all these cards are sitting in my dupes box. If you'd like one (even if you don't have anything to offer in trade), drop me a line.
Posted by Chris Stufflestreet at 4:14 AM