After releasing specialty sets since 1959, the Frank H. Fleer Corporation decided to really get in the ring with Topps in 1963 and issue a set of cards featuring modern baseball players. The design of the set was not bad, as this Willie Mays card attests: 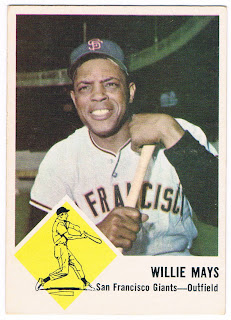 Card #5 -- Willie Mays, San Francisco Giants
Featuring a nice, main picture, there was a drawing of a baseball player in the corner, along with the name, team and position. While some may point out that the 1963 Fleer design wasn't too far off from the one Topps used that year (that is, if you placed a second player photo in place of the drawing), the back of the cards were a lot different from anything you'd see come out of Topps: 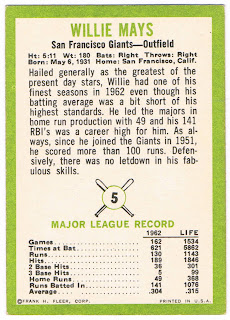 Card #5 -- Willie Mays (Back)
The biggest major difference was the way the back had its number placed right in the middle of the card. With Topps, Post, Jell-O, Bazooka, and even earlier Fleer cards, the numbers were normally located in a place where they'd be easily seen if you were thumbing through a stack. But not in 1963. Fleer put them right in the middle of the card, inside a baseball with two bats. The write-ups were better than what Topps used in its limited space; in fact, the vertical alignment of the text makes this card stand out.

There were 66 cards in the set. There were likely plans to make more, but Topps decided it really didn't need to have anybody to to them what they themselves had done to Bowman only a decade before. Instead, they took Fleer to court and argued that the cards infringed on their "exclusive" rights to sell pictures of players on gum cards. Fleer argued that they didn't include gum -- even though it was their company that had invented bubble gum -- and instead used a cookie inside the packs.

The term "cookie" is a general one. Since they needed to reduce the sugar content in order to avoid stepping on Topps' toes, they were generally considered to be terrible. In fact, court testimony recorded shows that a Topps executive said -- on the record -- that the cookie tasted rather like a dog biscuit. Eventually, the court sided with Topps and halted the Fleer set at one series.

However, that didn't stop thousands of sets from making their way into collectors' hands. Here are some of the memorable Fleer cards from 1963: 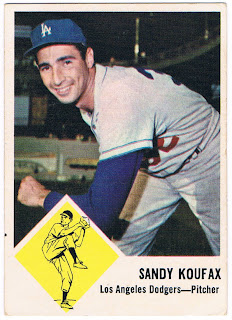 Card #42 -- Sandy Koufax, Los Angeles Dodgers
In 1963, the Los Angeles Dodgers returned to the World Series and faced their old nemesis from the days they played in Brooklyn: The New York Yankees. Showing that this team wasn't the lovable Bums of olden days, they sent the Yankees home in four straight. It was the first time the Yankees had ever lost in a sweep, and Koufax set the tone early, by striking out 15 batters in the first game. The newspapers had the following headline after that performance: 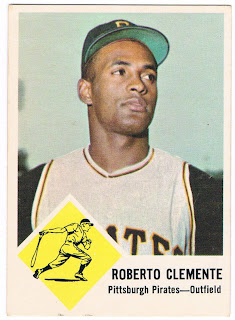 Card #56 -- Roberto Clemente, Pittsburgh Pirates
A little-known fact about Clemente was that he was a member of the U.S. Marine Corps Reserves from 1959 through 1964. He had been in a car accident in 1955 that had given him some back problems and sometimes limited his effectiveness on the field. However, once he was forced to serve in the military (as many American boys -- including ones from Puerto Rico -- were then) he became a Marine. Those who've paid attention know that Marines are infantrymen first, and the training helped his on-field performance. There would not be a comfortable desk job waiting for him there. After '59, Clemente's back problems went away. At the same time, his power and speed made him one of the more dangerous players in baseball. 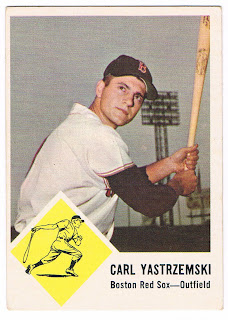 Card #8 -- Carl Yastrzemski, Boston Red Sox
"Yaz" was in his third season in 1963 and enjoyed a breakout year by winning the American League Batting crown. Later, he won a Triple Crown in 1967 and was the only batter to hit .300 in the entire league in 1968. He was a part of two pennant-winning Sox teams (1967 and '75) but never managed to get a World Series ring. When Fleer was finally able to resume active player cards in 1981, Yaz was one of only two players still remaining who had been in the 1963 set.

Jim Kaat was the other one. 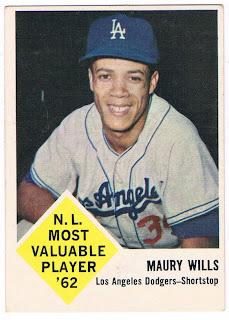 Card #43 -- Maury Wills, Los Angeles Dodgers
Actually, Maury Wills ended up being included in the 1981 Fleer set too, except he was featured as the manager of the Mariners, a team that didn't exist in 1963.

This card was obviously designed to remind collectors that there were some players who were missing from their Topps sets. Wills famously refused to sign with them after they declined to offer him a contract during his days in the minor leagues because they assumed he wasn't going to make it into the majors. In 1962, he set a new record for stolen bases, becoming the first modern player to swipe over 100 in a season. However, the mention of his '62 N.L. MVP award on the card itself seemed to give a raspberry toward Fleer's competitors in Brooklyn. 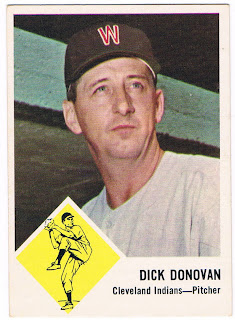 Card #11 -- Dick Donovan, Cleveland Indians
Another big difference between Topps and Fleer was the way they handled players who switched teams. Instead of using a "hatless" picture or airbrushing a new logo, Fleer just used an old photo and designated the new team. The only issue with Dick Donovan, though...was that he was traded to the Indians after the '61 season and played all of 1962 for the Tribe. In fact, even Topps used a picture of him in an Indians uniform on his '63 card. 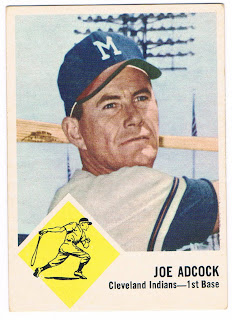 Card #46 -- Joe Adcock, Cleveland Indians
Another fellow Cleveland player was Joe Adcock, who actually was new to the club for the '63 season. In the case of this Adcock card, it's better remembered as a short-print than it is for his playing. Fleer printed a checklist, but needed to make room for it on the printing sheet. Thus, Adcock's card was bumped to allow for it. 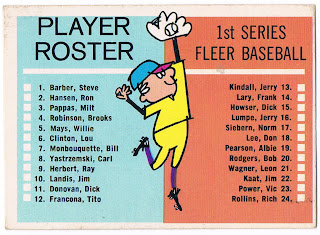 (Unnumbered) 1st Series Checklist Card
The use of the words "1st Series" indicates that Fleer definitely planned on issuing more, but Topps' injunction prevented them from doing so. It's not known who may have appeared in a second series, but there are always collectors who can imagine.
Posted by Chris Stufflestreet at 8:30 AM

Email ThisBlogThis!Share to TwitterShare to FacebookShare to Pinterest
Labels: 1963 Fleer