More Players on the Tube

My entry on Friday showed different sets that used a television design, and it occurred  to me after I posted it that I really could have given a little more attention to the most famous set that used it, the 1955 Bowman. Yes, I put up a link to an article I wrote about them, but I overlooked the set after that. This post should help rectify that somewhat.

The final baseball card set issued by the Bowman Gum Company before Topps bought them out was designed to look like a color TV set: 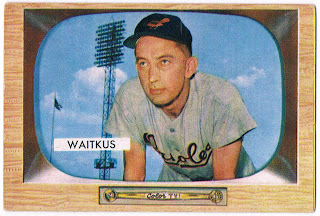 Card #4 -- Eddie Waitkus, Baltimore Orioles
The woodgrain border gave it the right look, since televisions then were built inside a wooden box, not the plastic shell most of us are familiar with. The "picture tube" is curved, and the design even features a border that looks like the one that separated the screen from the exterior. The card also featured this element that made the visualization even more perfect:

A faceplate. While this one didn't use a logo for RCA, Admiral or any other maker of televisions, you can see two knobs. The volume knob is on the left and the channel selector (VHF) is on the right.

No, there was no vertical hold on the back. Instead, the cards looked like this: 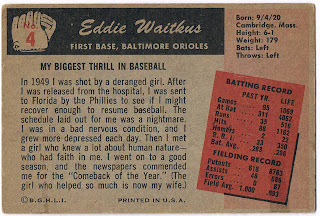 Most of the cards feature a short passage with a title like "My Biggest Thrill," "The Toughest Pitcher (or Batter) I've Ever Faced" and "My Advice to Youngsters." Reading through these cards, it seems Ted Williams and Stan Musial were the most respected hitters (although neither appear in the set) and Bob Feller was named often among the pitchers.

I'm going to stop for a moment and show something from the Waitkus card shown above:

That's quite a way to begin a story. I'm not going to rehash it -- that can be a topic for another post -- but Eddie Waitkus's story is interesting. I'd recommend looking it up if you're not familiar with what happened to him.

The first 64 cards in the set were given a blonde-colored wood border, but it was decided that the pictures stood out with a darker color. So, just like the models in the showroom at the appliance store, a new border was added: 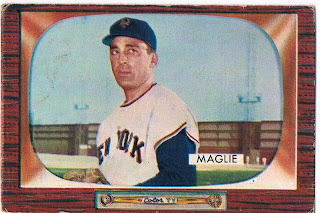 The change from a blonde wood to cherry wasn't sudden. The new color was introduced along with the older, as this Dick Cole card can attest: 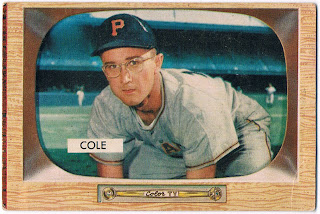 Card #28, Dick Cole, Pittsburgh Pirates
There is a streak of a cherry-colored border down the left side. Some collectors need to know that cards like this are occasionally found short, since collectors sometimes trimmed off the extra border. Other collectors, however, didn't stop there: 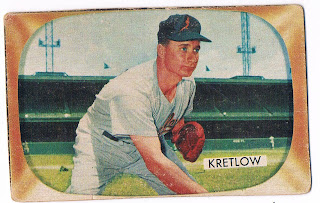 Card #108 -- Lou Kretlow, Baltimore Orioles
While that's an extreme example, the darker borders are very susceptible to damage. They are frequently found trimmed or recolored to hide some of the damage. I knew a collector who was well on his way to building a killer top-grade set and eventually quit out of frustration after finding that some of his cards had been altered when he began submitting them to a third-party grader.

As you may have noticed, many of the photos used in the set have noticeable towers in the background. They were taken at Shibe Park in Philadelphia, which had been home to the Bowman Gum Company as well as two major league teams. While there are other stadiums used (notably Ebbets Field and Yankee Stadium), most of the pictures were taken there during the 1954 season. Unfortunately, the A's moved to Kansas City for the 1955 season, so Bowman would not have had the benefit of two leagues passing through their home city to get photos for '56. Topps took care of that little problem by purchasing the company. 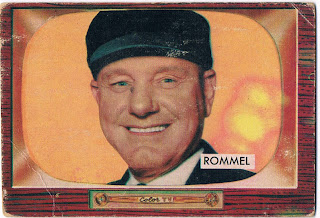 Card #239 -- Edwin Rommel
The final series of 1955 Bowman cards included a subject that had never been seen on baseball cards: umpires. There were 31 in all. While the kids of '55 likely had issues with cards of old men in their uniforms, collectors find them intriguing, since a number of the arbiters are now Hall of Fame members and these cards represent their only appearance in a mainstream set.

Several errors appear in the set as well. Here's a card for a young player from the Detroit Tigers: 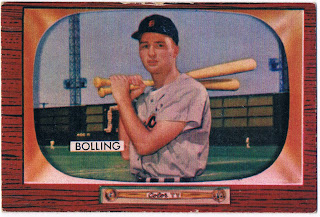 Card #204 -- Frank Bolling
There are two different backs for this card:

Frank and Milt Bolling were brothers who played at the same time. Despite being on different teams, Bowman still managed to confuse them. Not only did they mess up card #204, the same error was found on card #48 (Milt Bolling's card).

Bowman also managed to confuse the non-related Don and Ernie Johnson (cards 101 and 157) and also had to go back and correct Harvey Kuenn's card after spelling his last name as "Kueen." In all cases, the corrected versions are the rarer ones. Additionally, Card #195 of Erv Palica can be found with or without a line on the back saying he'd been traded to Baltimore. I'd show mine, but a former owner already placed the notation on the back for me.

Despite not being able to get their Bollings straight, another brother combo was given their own card: 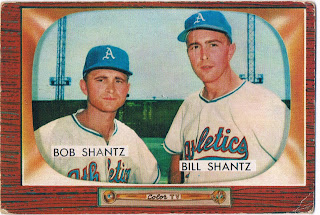 Card #139 -- Bob and Bill Shantz
Interestingly, each brother had his own card in the set as well. There was no confusion, though. Perhaps being in Bowman's home city was a benefit.
Posted by Chris Stufflestreet at 8:30 AM