You may have heard there is a big football game being played this weekend. Long-time readers know I have an affinity for one of the teams that will be playing. However, as a fan of football the way it used to be played, the other team is also a team I appreciate due to their long-term history. Yes, I'm a Steelers fan. However, you'll never hear me trash-talking about it, as I prefer to let the team do its own talking on the field. As a fan of history...watching two teams with so much tradition go at it for all the marbles is just a great thing for the game. I just hope it's not a blowout either way; there's nothing worse than losing interest during the third quarter because the game's gotten out of hand.

So, this post will focus on something from my Steelers collection. That said, it'll still be written to inform collectors about a couple things they may never have realized.

But, before the football part...a little baseball card talk. In 1952 Bowman was definitely caught off guard by Topps and its baseball set. Therefore, they made the decision to enlarge the size of their cards for 1953 to (almost) match the larger size Topps used. Before making that decision, however, they decided to print their 1952 football set in the two sizes: 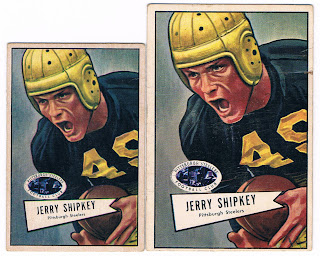 That's a great pose on this Jerry Shipkey card, one that is close to the image used for both his 1950 and '51 cards. He looks like he's giving a command to one of his blockers to open up a hole for him.

The card on the left is the same size as 1951 and '52 Bowman baseball cards. The card on the right is the same size as 1953-'55 Bowman baseball cards. Each of the 144 cards of Bowman's set was made in both sizes, with some scarce cards in the larger-sized set. Cards that are divisible by nine are tougher to come by, with the numbers 72 and 144 being the hardest.

In fact, one of the three cards I still need for my '52 Bowman Large Steelers set happens to be #72, featuring John Schweder. I don't expect to add that one for a while, but if I do, you'll see it here.

Although Topps wasn't intruding on their football license in 1952, Bowman added some extra cards to their set that weren't part of their previous sets. Several rookies were featured in their college uniforms -- and while Topps released college football sets in 1950 and '51, they wouldn't do another until 1955 -- and each team had its head coach included. This included mainstream cards for legendary coaches like George Halas, Paul Brown and Steve Owen.

The Steelers' head coach was taking over as the 1952 season began: 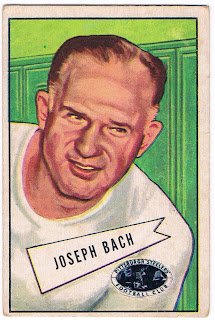 It was Joe Bach's second stint as the Pittsburgh coach, after leading the team (then called the Pirates) in 1935-'36. One of the members of the very first Notre Dame team to win the National Championship in 1924, he was a teammate of the vaunted "Four Horseman." The back of the card says more: 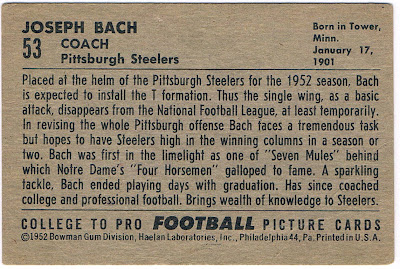 Bach played both offense and defense, which was common in those early days. However, one thing shows up on the card that shows how history was being made. It mentions that Bach was eliminating Pittsburgh's single-wing offensive formation in favor of the T-formation. The single-wing was developed by "Pop" Warner and involved the ball being thrown to the quarterback rather than snapped. It's a precursor to the modern "shotgun" formation but had the backs in different locations.

While this card mentions the "temporary" loss of the single-wing, the history books still show that the Steelers were the last team to use it, and that they abandoned it in 1952.
Posted by Chris Stufflestreet at 8:30 AM