In the spirit of my last post...here's a few cards I've recently added to my collection: 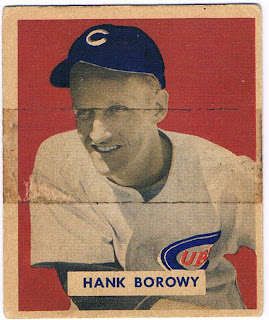 Hank Borowy is a largely forgotten name today, but he was a participant in three World Series in the 1940s. Starting out with the Yankees in 1942, he pitched against the Cardinals in both the '42 and '43 World Series and went 1-0 with a no-decision. However, being an effective pitcher from 1942-'45 wasn't considered such a feat because the major league rosters had been slowly transformed by a different type of draft altogether...the one from Uncle Sam. As the war in Europe ended and star players began to be mustered out of service, several players began to see their limited window of opportunity closing. For Borowy, the end seemed to come in July '45 when the Yankees placed him on waivers despite a 10-5 record and 15 teams passed on him.

Then, the Cubs picked him up and added him for their pennant run. He went 11-2 during that stretch and was a big part of the National League pennant. In the World Series, he took the mound for four games against the Tigers. After a masterful shutout in Game 1, he lost Game 5. Undaunted, he came back to win Game 6 with a relief appearance that not only saved the game but the Series. However, When he took the mound for Game 7 as the starter he'd been used up. After three batters, he was pulled and the Cubs lost the Series.

As of today, that relief effort in Game 6 makes Hank Borowy the last Cubs pitcher to win a World Series game. He was also the first player in history to win 10 games each for two different teams in the same season. He appeared on three Bowman cards, and this was his first. Despite being shown in a Cubs uniform here, he pitched with the Phillies in 1949 and is identified with his new team on the back of the card.

Last summer, I showed some of the program for the '84 National in Parsippany, New Jersey. Borowy was one of the guests signing autographs there: Through the 1950s, he played with the St. Louis Browns and then the Washington Senators. Since those were perennially awful teams, he's been forgotten by fans who don't bother looking outside the New York City-based teams that enjoyed much of the success of that era. What's interesting about Sievers, though, is that he still managed to hit 300 homers in his career at a time when that was a much bigger milestone than it is today. He was the 18th player in history to reach it and was the first who didn't get into the Hall of Fame.

Roy Sievers is still living in the St. Louis area. 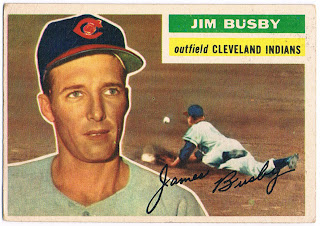 1956 Topps #330 -- Jim Busby
One of the things collectors like about the 1956 Topps set is the way the action shots nicely add to the card. Many of those photos are great game-action shots with plays at the bag (or the plate). However, this one just looks odd. Busby appears to be sliding into second, but the fact that there's no fielder present might give the impression that he's blown the play and is watching that ball get away.

1956 was the only full season Busby spend with the Tribe. He was on original member of the Houston Colt .45s in 1962, when he retired and became a coach. He was still coaching in 1977, when he was part of the first Seattle Mariners team in 1977.

Jim Busby died in Augusta, Georgia (a town where I once lived as well) in 1996.
Posted by Chris Stufflestreet at 8:30 AM