Another Card From the Collection

Today, I'll share another card from my personal collection. While I usually take this space to show off some of my "cards with character," this one is actually a really nice card for its age. 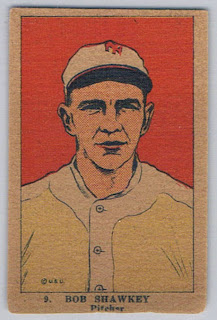 It's a W515-1 strip card from 1923. Although it's missing the bottom part that identifies him as a Yankee, it's in excellent shape considering it's printed on a 88 year-old piece of thin paper. Strip cards in general get little respect from hobbyists because they arrived after the end of tobacco and caramel issues but before bubblegum issues, yet represent an excellent way to pick up stars at a great price.

Here's why having a car from 1923 of Bob Shawkey is neat: 1923 was the first year the New York Yankees played in Yankee Stadium, and Bob Shawkey took the mound for the very first game they played there. He pitched the complete game against the Red Sox on April 18th and won by a 4-1 score. He was aided by a home run by Babe Ruth in the 4th inning.

At the end of the season, Shawkey was a member of the first Yankee team to win a World Series and won Game 4. Later, he was the team's manager for the 1930 season.
Posted by Chris Stufflestreet at 12:04 PM

Email ThisBlogThis!Share to TwitterShare to FacebookShare to Pinterest
Labels: W515