Back in November, I showed this "card": 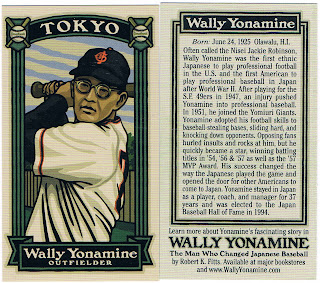 It's a modern creation by Gary Cieradkowski (of The Infinite Baseball Card Set Blog) featuring Wally Yonamine, who was a pioneer in two sports. First, he was the first professional football player of Asian descent when he suited up for the 49ers in 1947. Second, he was the first American-born player in Japan's professional baseball league, and played at a time when there was still a great deal of uneasiness from the Japanese that was caused by several years of war with the United States.

As a man who was ethnically Asian but brought up in another country, Yonamine was often seen as rude and aloof when he simply didn't understand the culture. His aggressive style -- learned on American ballfields -- seemed odd to his Japanese opponents and fans, which led to him being booed until enough people began realizing that games were being won. Later, he served as a liaison with other American players, giving them pointers on the differences they would experience. After his playing days were over, he went on to manage and earned a place in the Japanese baseball Hall of Fame.

Sadly, Yonamine died last week at 85. Though death is a natural event that is going to happen after enough time passes, it still leads me to pause and think about the stories that are now forever silenced.

Wally Yonamine's story is an interesting read. Most readers of this blog don't know much about him (and, to be fair, neither do I) because we tend to focus on the sport from an American perspective. However, most fans realize that baseball is a huge sport in Japan. My post in November had a link to a book about Yonamine's life and times. Feel free to check it out now that the final chapter has closed for him.
Posted by Chris Stufflestreet at 8:30 AM