Last month, I showed how Topps used the same exact design for their football and hockey sets in 1966. There was no attempt to make a subtle change for the sake of collectors who pick up different types of cards so they could avoid getting Stan Mikita mixed up with Nick Buonticonti.

It turns out it wasn't the first time they did that.

That post I mentioned earlier got some feedback from a reader who goes by the handle 1967ers. Shortly after that post, he let me know about his blog, where he says he'll focus on hockey material. This post described the 1964-'65 Topps hockey set, which looked like this: 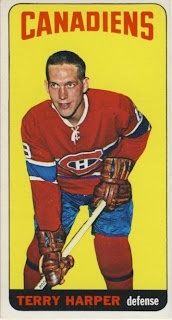 Card #3 -- Terry Harper, Montreal Canadiens
I immediately recognized the design because of another set: 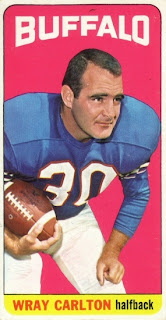 Card #26 -- Wray Carlton, Buffalo Bills
(Image borrowed from the Virtual Card Collection)
It's the exact same design (and dimensions) Topps used for the 1965 football set. While the team name on the hockey cards are replaced by a city name, they still retain the curvature at the bottom. In addition, the corners are similarly rounded. While both of the cards shown above feature partial body shots and equipment, both sets feature an awful lot of head shots, which look really weird on such large-format cards.

There was a minor change to these cards. Here's the back of that hockey card: 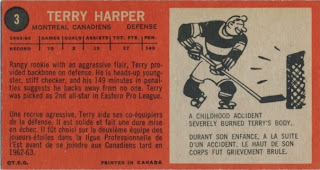 Now look at the back of the football card: 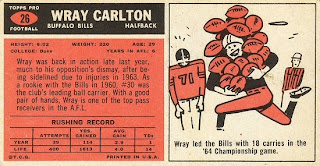