Since learning about the recent passing of Duke Snider, I dug through some archives of material I'd written for a hobby newsletter between 2002 and 2008. Here's a book review that I really should have featured earlier: 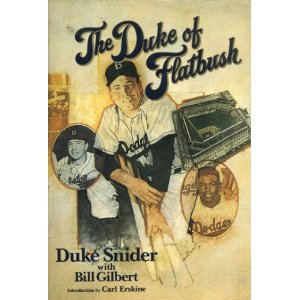 The Duke of Flatbush by Duke Snider with Bill Gilbert (1988)

I have no memory of the Brooklyn Dodgers other than what I've read in books, seen in pictures or heard from stories.  Fans -- still bitter that the team moved west -- let me know as I was growing up how much they hated the Yankees for beating their beloved Bums six times in the World Series, how great it was in '55 when "Next Year" finally arrived, and how heartbroken they were when Walter O'Malley announced that the team was leaving.

Duke Snider's autobiography is a good place to start if you'd like to understand why the Brooklyn Dodgers still hold a special place in the hearts of their fans.  Snider's story is presented here in plain English (though most of the credit for that should probably go to cowriter Bill Gilbert), and doesn't stray into the gritty "tell-all" tabloid material found in far too many sports-themed memoirs.  Duke follows the old saying that if he couldn't say anything nice about somebody, he shouldn't say anything at all.  There are no stories of raw deals from the front office, no sordid details about teammates and nothing at all about locker room gossip.  You get the sense that Duke realized how lucky he was to play baseball for a living, and that time only made him appreciate that more.  Snider's only real negative comments were reserved for Roger Kahn's The Boys of Summer, and he was even nice in the way he described what he felt was wrong about the book.

Duke tells about growing up in Southern California, watching Jackie Robinson play for UCLA and being honored to join the Dodgers the same year as Robinson did.  He talks of carpooling to Ebbets Field with Carl Erskine, Gil Hodges and Carl Furillo from Bay Ridge, and how they all had to take jobs in the winter months to provide for their families.  Snider grew up in the Depression, lost time from the game to do menial service in the Navy during World War Two (the Navy kept him away from danger because he was a ballplayer), and saw some of the worst in people when they reacted to Robinson, but Duke doesn't dwell on the bad parts of his story.

It was a great read and really gave a feel for what the game was like during the 1950s and helps explain why the Brooklyn fans were so fanatic about their team.


(The Amazon link below lets you pick up the book for as little as 1 cent.)

Email ThisBlogThis!Share to TwitterShare to FacebookShare to Pinterest
Labels: book