Here's a card that is 95 years old, yet has been seen by very few collectors: 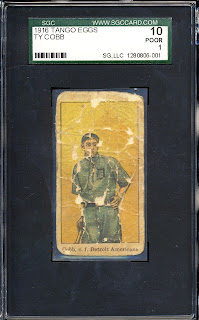 (This may be the first time I've ever shown a card here that's been graded)
This is not my card. Nor do I have any sway with its owner. This was graciously shown to me by a person who helped make the discovery.

1916 Tango Eggs weren't assigned a number in the American Card Catalog, because Jefferson Burdick and his fellow collectors didn't know they existed. In fact, little was even known about the set until a large cache of them appeared about 20 years ago. Even then, it isn't known how many of the cards make up a complete set. There were 16 different cards in the "find" but it isn't yet known if there are 18 or 20 that make up the set. Among the speculated "extra" cards was one of Ty Cobb, but one never materialized.

The card above is proof that one does, in fact, exist.

Tango Eggs were originally offered by L. Frank and Co., a New Orleans-based poultry company. The fact that the South really isn't as baseball-crazy as Northern cities (where most collectors are from) probably explains why these cards went unnoticed for so long. The card above was discovered in Louisiana, which gives hope that the two "missing" Tango Eggs cards -- Honus Wagner and Joe Tinker -- will also surface someday. The Cobb card is likely being sold to the highest by a major auction house in the coming months.

For additional information about the Tango Eggs set, check out this blog post from Dean's Cards.
Posted by Chris Stufflestreet at 8:30 AM