This weekend, the 2012 NFL season begins. With that, there is no better reason to go back to showing football material here on The Vintage Sportscards blog. And here's a card from the oldest NFL set that came inside a gum pack.

White attending the National in Baltimore...I picked up what is now my oldest Pittsburgh Steelers item...Actually, it isn't technically a Steelers item, as it predates the team's nickname: 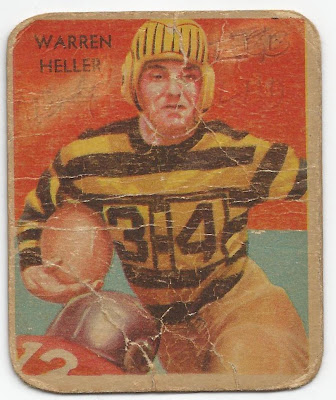 This is a 1935 National Chicle card. It's one of four in the 36-card set that feature what were then called the Pittsburgh Pirates. National Chicle was the Cambridge, Massachusetts company that also made Diamond Stars and Batter-Ups baseball cards during the 1934-'36 timeframe. However, this set wasn't as ambitious as either of those: there was a 24-card series followed by 12 high number cards that includes a card of Bronko Nagurski that is among the highlights of a football collection.

Fortunately for me, Nagurski wasn't a Steeler, so I don't need him for my collection.

Backs are quite similar to what is found on the other National Chicle sets of the era, with a written "testimony" from a local celebrity: 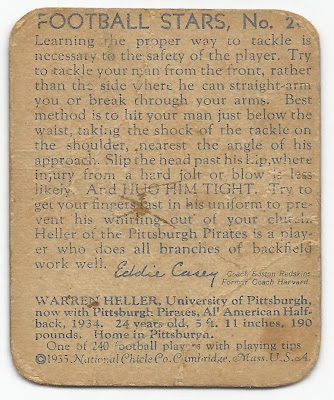 The copyright line lists 240 players, but the realities of the Great Depression limited the set to 36 cards.

Warren Heller is listed as a halfback here, but he was also a quarterback for the team. He was a consensus All-American in 1932 with the University of Pittsburgh and was a Pirate (what we now call Steelers) from 1934-'36, so this was right in the middle of his pro career.

One down, three to go...but I don't see them coming my way soon. I know, I should never say never, but these have been on my wantlist for more than a decade.
Posted by Chris Stufflestreet at 8:30 AM