(Today, this blog passes 400 posts. Not bad for a pursuit I'd be afraid might run out of gas by now. But, as long as I keep getting inspiration, I'll keep showing up and posting.)

Today's post shows a couple of cards I recently received from a trading buddy: 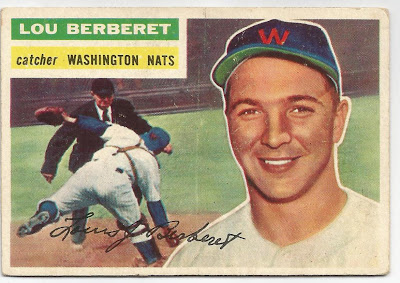 One of the things that really makes the 1956 Topps set stand out for me is the way it used an additional action photo along with the head shot. And the action shots were sometimes interesting: a player is shown running the bases, or grabbing a fly ball, and a lot are shown in plays at the plate. Since Lou Berberet was a catcher, he was a natural for a play at the plate. However, the Topps artist appears to have cropped out the runner...so he looks to be showing a dance move to the umpire.


And now for the other card in that package...a "Wow" if there ever was one: 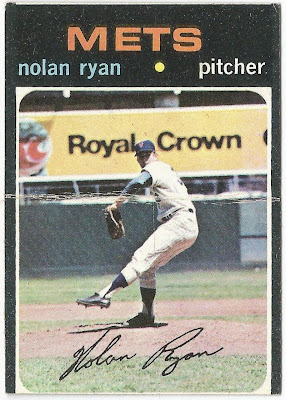 This picture is almost a commercial. If you told most people that RC Cola was a sponsor of Nolan Ryan's 1971 Topps card, there'd be little argument. I know it was a sign at Shea Stadium at the time, but Ryan's positioned so well in the shot (and we are so predisposed to seeing commercialism anyways) that it just looks a little too nice.

As for the card? Yes, it's off-centered to the point of being considered a miscut. And yes, there's a crease that runs right through the middle that extends to the back of the card. But if you've bothered to pay attention to this blog, you know that I don't care about that stuff as much as others do. The card was the right price -- free -- and the sender figured it would have a better place in my own collection than it would in his dupes box.

And he'd be right. It's a great addition.
Posted by Chris Stufflestreet at 8:30 AM