When I went to the National earlier this month, I picked up some items with future blog posts in mind, and also to add some interesting items to my collection. These items fit both of those criteria.

I've mentioned here before that I have some interest in vintage Japanese cards. While in Baltimore, I picked up a few type cards to add to the collection, all are from the 1948-'50 time period and all are different types of Menko cards. 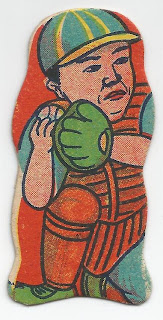 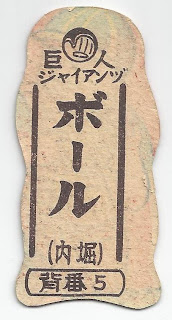 This is a die-cut Menko from the JDM 14 set. They are distinguished by a bat/ball/glove at the top on the reverse. It features Tamotau Uchimori, which I figured out simply by the uniform number...I am still not able to read the characters on the card. There are 12 cards in the complete set, and this is one of the commons. 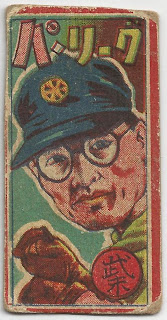 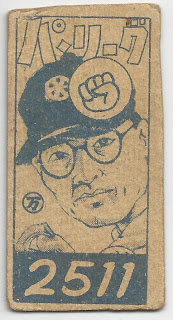 This card is a rectangular Menko. The cards were designed with a number of games for kids to play. While there was the "card-flipping" aspect familiar to American collectors of the era, Menkos also featured other games, such as the rock/paper/scissors game represented in the fist on the reverse. This is one of the cards in the JDM 119 set, also known as Maruman cards from 1950 (Maruman is a company; their logo appears on the reverse next to the player's cheek). From what I understand, the league designation -- Central League or Pacific League -- runs along the top and the player's name appears in the circle. The name on the back is obscured by a number, which lets me identify it. This is Shissho Takasue. 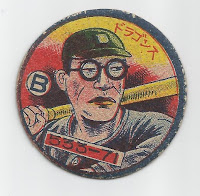 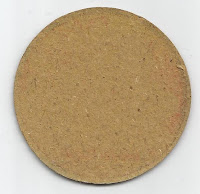 Now, I'm still trying to determine this one. It's a round Menko and is thicker than the others, presumably so it can be thrown down by its owner in a game. According to my reference book, this design should be a JRM 17 except for two major things: the borders should be red and there is no "533-71" card listed in that set.

If you know, chime in in the comments. This one is beginning to get under my usually thick skin.
Posted by Chris Stufflestreet at 8:30 AM