Now that I have a scanner, let me resurrect a feature I really enjoyed...commenting on the careers of players whose cards I recently picked up...this time from the 1954 Bowman set: 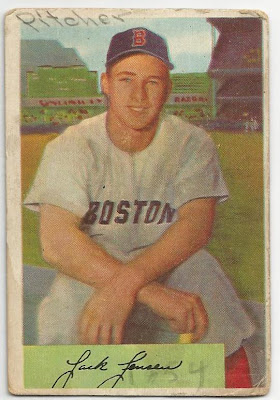 Card #2 -- Jackie Jensen, Boston Red Sox
Somebody was nice enough to pencil in "Pitcher" at the top of the card, which was somewhat wrong...Jackie Jensen was an outfielder, even though he did pitch in college. However, the 1954 date scribbled in at the bottom was correct.

Jensen benefited from the GI Bill. After serving in the Navy during World War II, he went to the University of California and earned All-American recognition in two sports there. Not only was he a standout baseball player who helped Cal win the first College World Series, but he was a star halfback on the team that played in the 1949 Rose Bowl. After his junior year, he left college to play baseball.

In 1954, he was just beginning with the Red Sox. He had been with the Yankees, where he was expected to replace Joe DiMaggio in center field until the arrival of Mickey Mantle changed the team's plans, and then the Senators, who didn't have another "big name" to help. Boston had Ted Williams, so that wasn't an issue. He thrived in Boston and won the 1958 MVP award. However, his aversion to flying made him walk away from the game while he was still at his peak. 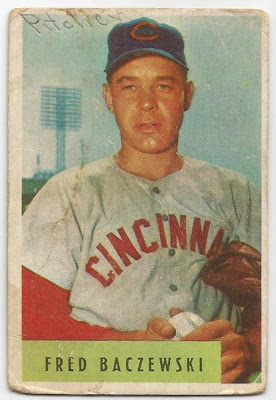 Card #60 -- Fred Baczewksi, Cincinnati Reds
The same previous owner who penciled in "Pitcher" did so here as well. This time, Fred Baczewski was a hurler. In fact, when this card came out the southpaw had just completed a terrific rookie campaign, where he went 11-4 after a midseason trade with the Cubs. However, he was unable to sustain that success and was back in the minors by 1955. 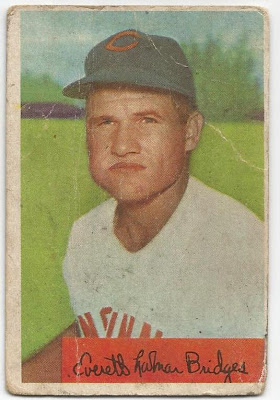 Card #156 -- Rocky Bridges, Cincinnati Reds
The card here says Everett Lamar Bridges, but everybody knew him as Rocky. And that was an apt nickname. His 1959 Topps card appeared in a book called The Great American Baseball Card Flipping, Trading and Bubble Gum Book. I'll let that book's authors Brendan Boyd and Fred Harris speak about him:

"Rocky Bridges looked like a ballplayer. In fact, he probably looked more like a ballplayer than any ballplayer who ever lived. His head looked like a sack of rusty nails, he kept about six inches of tobacco lodged permanently in the upper recesses of his left cheek, and his uniform always looked as if he had just slept in it...(he) could have intimidated Ty Cobb. He was the sort of guy who would spike his own grandmother to break up a double play."

Their book is available at Amazon, just click the link below. If you've never read the book, check it out. You'll be glad you did.

With a reputation like that, you'd think that he'd have died tragically. However, Rocky Bridges is still around today...in fact, he's the only person in this post who didn't pass away relatively young. 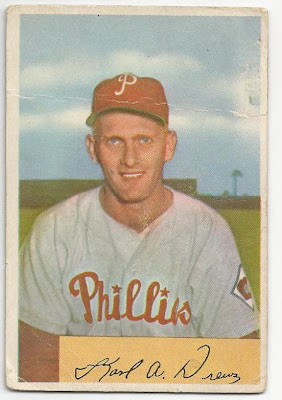 Card #191 -- Karl Drews, Philadelphia Phillies
Karl Drews spent a long time in the game. Signed at the age of 18 before the 1939 season, he worked his way through the minors (except 1943, when he wasn't playing at all) and finally broke into the big leagues with the Yankees in 1946. He would be demoted back to the minors in 1950 after going to the St. Louis Browns, but fought his way back. 1954 would be his last season in the majors, but he kept pitching. In 1960, he was pitching in Mexico before hanging up the glove at the age of 40.

After all that fighting, Drews was killed in 1963 after his car broke down in Florida. While getting help, he was hit by a drunk driver.
Posted by Chris Stufflestreet at 8:30 AM