Ballad of Another Forty Bucks

Last month, I featured the details of a deal that I recently completed and promptly had the most successful post on this blog in a long time. Well, here's hoping the iron strikes again...

The opportunity to make another "dealer scum" deal arose with the same trader (Ed Schott of Baltimore). For another forty dollars, Ed sent the following cards: 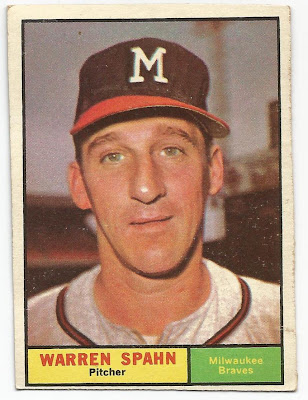 1961 Topps #200 -- Warren Spahn, Milwaukee Braves
At first glance, this card looks really nice. However, the bottom edge is uneven, showing that it's been trimmed. The condition was made clear before the deal was made, which is important whenever money changes hands. As you can see, the condition presents well but little things like trimming need to be brought up ahead of time to head off future problems when (not if) they are discovered. As a seller, you really don't need to get a reputation because you don't notice details. Even if it isn't your fault.

I say that now, because the other card from 1961 is certainly trimmed: 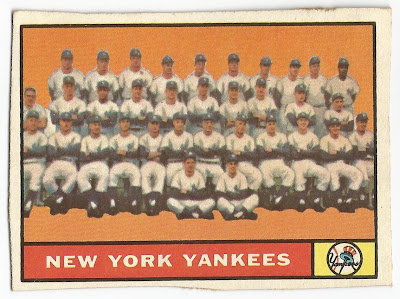 1961 Topps #226 -- New York Yankees Team Card
There's no question this card was trimmed, as all four edges show uneven borders. However, this type of card makes some collectors a little squeamish. Personally, I'd rather have a hole in the card than one in the binder. I can always upgrade later.

Trimming is about the only thing that isn't apparent on the next card: 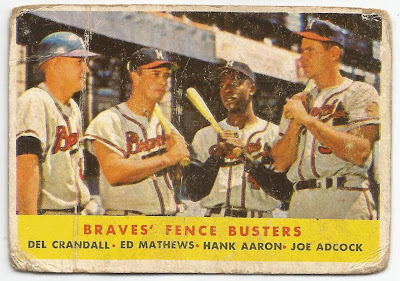 1958 Topps #351 -- Braves' Fence Busters
In 1961, three of these players -- Aaron, Mathews and Adcock -- would team with Frank Thomas (on the Pirates in 1957) to become the first tandem to belt four straight home runs, in a game against the Reds. The mark has been equaled six times since, but has never been broken. Topps was noting their power three years earlier.

Not only that, but it was a chance to add a card featuring two Hall of Famers into my 1958 Topps binder. 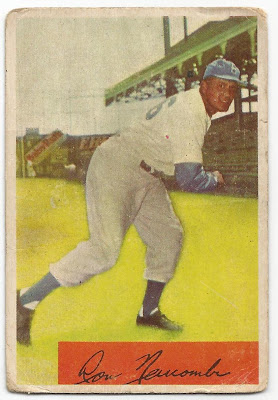 1954 Bowman #154 -- Don Newcombe, Brooklyn Dodgers
I also enjoy sliding another 1950s Brooklyn Dodger into the binder as well. And this one cuts my 1954 Bowman wantlist to 92 cards, but a quick count shows I still need 10 of the 14 Brooklyn Dodgers including Duke Snider, Pee Wee Reese and Roy Campanella.

Fortunately, I'm not a fan of the Bums (even though I respect their impact on the game). The fact is, I'm a fan of this guy's team: 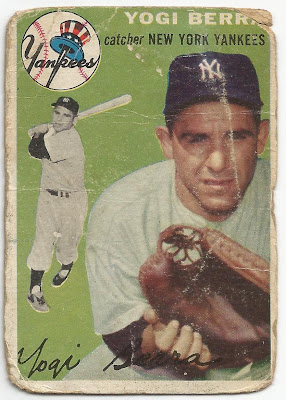 1954 Topps #50 -- Yogi Berra, New York Yankees
The flip side to being a Yankees fan is that I really need to adjust my expectations about how much I spend on the cards of the players who wore pinstripes over the years. This card -- beat up as it is -- accounted for about half of my $40 purchase.

So I ask again: would you have made this purchase? Or would the trimmed cards have made you reconsider?
Posted by Chris Stufflestreet at 8:30 AM