Now that I've returned to civilization and begun adjusting to my regular routine, here's a few thoughts on last week's event in Baltimore:

The best item of the show may not have been a purchase at all...this little item was handed to me by fellow blogger Dave Hornish (the proprietor of The Topps Archives blog). 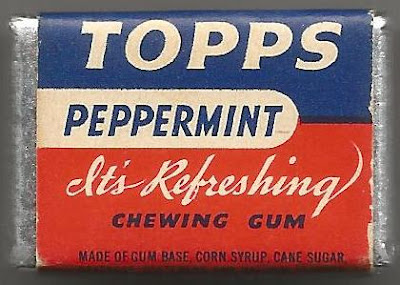 It's an intact piece of gum from 1946, before Topps even produced cards. One of four different flavors (the others were spearmint, pepsin and cinnamon), it will remain in its present state and take a place of honor in my collection.

Dave wasn't the only fellow blogger to show up, either. Bo -- better known as Phungo -- stopped by the table where I was working and had one of his specially-made packs to give to me. Here are the contents: 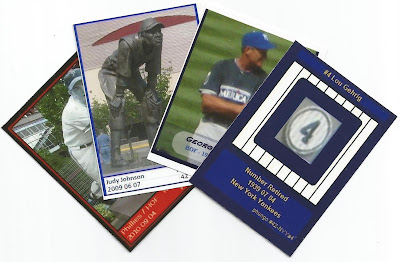 Every one of the cards inside has a vintage tie to it. I don't know if that was intentional, but it was definitely appreciated.

I see in his post on The National that I ended up being the only other blogger he ran into. That's a shame, as the Blogosphere is big enough to have a bigger presence at the hobby's premiere event. But I will say this: I agree with his assessment that The National is overwhelming. This was my sixth time at one, and I'll admit that one day there just isn't enough to take it all in.

I picked this up at a table for the outrageous price of $1: 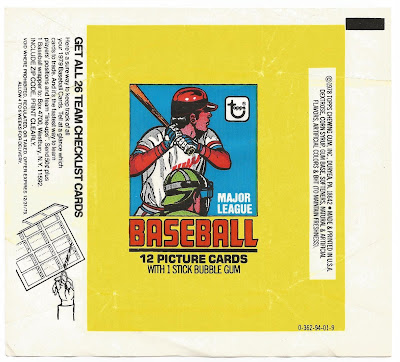 This opened wrapper is from 1979, the first year of baseball cards I collected. I remember opening the yellow wax for what was inside, but it never occurred to me to actually hold on to one for my collection. So that was rectified with this wrapper.

By the way...baseball wasn't the very first thing I collected. That honor goes to Star Wars, which I mentioned here a couple of years back. I even managed to find an unopened item for that part of the collection, too: 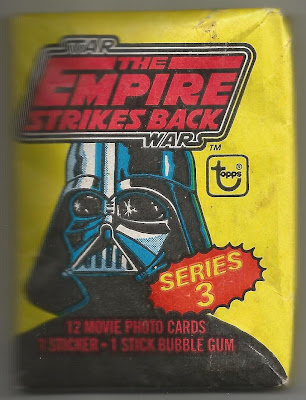 That will join my other unopened packs...now that I've completed the base set, I'm no longer tempted to see what is inside these.

On Thursday, I attended the Topps "meet and greet." In the process, I answered four trivia questions and received two boxes of new product and two new specialty cards. Since I really had no use for the newer stuff, they went to kids in the audience (which surprised the Topps execs who watched me do it; they had just asked me nicely if I could keep it off of eBay until the next Wednesday). I did keep one of the items, though: 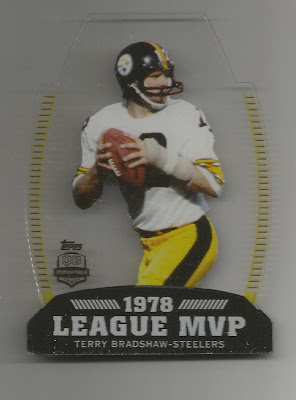 As a Steelers fan, I wasn't about to get rid of this one. Especially something that reminds me that even the Topps executives can get jaded by the actions of hobbyists, and can also act surprised to see a hobbyist just give away a whole box of cards to a kid who might enjoy it more.

I picked up several more cards last week, and I will show them later as I cover some of the sets I feature in the future. If you went and I missed you, hopefully we can cross paths in Chicago next year. If you didn't make it this year, I'd be glad to see you in the future. The National is like Mecca...it's a place that every collector needs to see at least once.
Posted by Chris Stufflestreet at 8:30 AM

Email ThisBlogThis!Share to TwitterShare to FacebookShare to Pinterest
Labels: hobby, the National