Since this blog is going to cover a wide range of sports cards -- even though baseball will likely dominate the topics -- here's a set that can help add some additional sports to the discussion here. Much of this has been taken directly from my website:


Even though only three of the cards out of 48 feature baseball players, the 1933 Sport Kings is among the most important hobby sets of all time. In all, 18 sports are showcased in the set and many of the athletes outside of the baseball players are legends. The set is significant for a number of reasons: it has the first individual cards of basketball players, it is one of a few vintage sets to feature women athletes and might be the first set to have separate cards of a father and son.

The Sport Kings set was a Goudey issue. In many ways, they resemble the 1933 Goudey baseball set. Measuring the same 2 3/8" by 2 7/8" as all Goudey baseball and non-sports sets, each front features a color painting of the pictured athlete against a solid-colored background. Above the athlete is a red "Sports King Gum" banner. Below the picture is a black strip with the athlete's name and a silhouetted representation of the sport he or she plays. A circular 1933 Goudey copyright also appears on the card. A white border surrounds all of these elements. Here is what Carl Hubbell's card looks like: 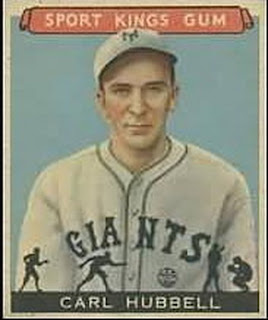 Backs will be familiar to collectors of Goudey's 1933 baseball and Indian Gum sets: most of the info on the reverse side is in the form of a biography of the athlete. Above the paragraph are the card number, player's name and sport, and a Goudey Sport Kings gum advertisement appears below it. For example, here is the back of that Hubbell card: 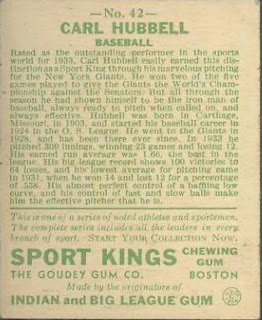 The three baseball players are Babe Ruth, Ty Cobb and Carl Hubbell (Jim Thorpe appears in the set as a football player). At the time, Ruth was winding down his career and Cobb was retired, but Hubbell was on his way to an MVP season and helping his New York Giants win the World Series. Football is represented by legendary Notre Dame coach Knute Rockne, Thorpe and Red Grange. Four subjects are members of the Boston Celtics basketball club, making them the first individual basketball cards (some college teams were shown on Murad tobacco cards in 1910, but the first mainstream basketball card set wouldn't arrive until 1948). Howie Morenz of the Montreal Canadiens is one of four hockey players in the set.

The cards were sold in one-cent wax packages, which looked like this one: 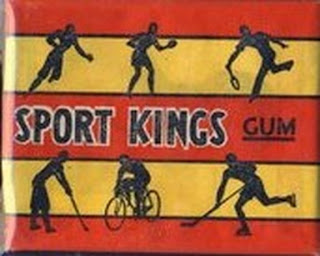 There can't be many unopened packages left from this set.

Collectors who simply stick with baseball or football players are missing out on some of the other great athletes featured here. Bicyclists Bobby Walthour Jr. and Sr. make up the father-and-son subjects. Babe Didrickson is among the best-known women athletes in history, which makes her card in this set significant. Among the boxers are Jack Dempsey, Gene Tunney and Max Baer. Immortal golfers Bobby Jones and Gene Sarazen show up, as does Hawaiian surf legend Duke Kahanamoku (who is shown as a swimmer). Two Sport Kings went on to gain even more fame after the set's release: Swimmer Johnny Weissmuller is best known for starring in a series of Tarzan films and aviator Jimmy Doolittle will be forever linked with the bombing raid he led over Tokyo during World War Two.

For collectors, this set offers a little of everything. Not only does it offer cards of many of the biggest names of the time, it also gives collectors a chance to better understand a time when athletes were better-known for their skills than for the money they landed. It was a time when hotshot aviators, bobsledders, ice skaters, billiard players and dogsled racers could be considered peers to baseball, football, basketball and hockey players and the ladies -- okay, one lady -- were given recognition as well. The only thing that could have made the set more inclusive would've been to give a couple of nods to African-American athletes, but that was a moment whose time was still yet to come. In a way, the 1933 Sport Kings set shows sports in a way that hasn't been seen in America since Wide World of Sports fell out of favor, except during the Olympics.
Posted by Chris Stufflestreet at 4:24 AM