I've recently had an article published in a new hobby magazine.

Titled "Collecting the Beater," it appears in the very first issue of a magazine called Collector. It was formerly SGC Collector but the control has been turned over from SGC (the 3rd party grading company) to Novocent Partners, who had been handling the printing.

If you'd like to subscribe, click here. It costs $20 for one year (4 issues). I may run my article in this blog later, but here's one of my scans provided to the magazine. I'll add a few more between articles as a way of lightening the mood. 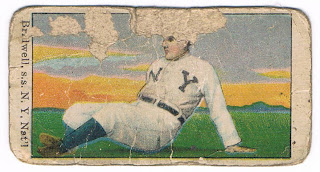 This card is an E92 Dockman card of Al Bridwell. The card is supposed to show a dark cap on Bridwell's head, but paper loss has made it seem like he's laying around with his head in the clouds. Despite what some condition-sensitive collectors might say, it's still a card that's more than 100 years old and I'm proud to claim it as part of my collection.
Posted by Chris Stufflestreet at 3:26 AM