There's a group out in cyberspace called Old Baseball Cards (OBC). I have been a member of that group since 2002 and have become well immersed over the years in the lingo used among members to describe cards. For example, 1970 Topps are called "Cool Greys," 1971 Topps are known as "Black Beauties" and 1972 Topps cards are called "Psychos." Likewise, "Woodies" are 1962 Topps cards and 1955 Bowman cards (which also have woodgrain borders) are called "TV sets." "Moof" is the distinctive musty smell of some old cardboard, and when an OBC member says something about "Dealer Scum" it's not an insult to card sellers but a method of explaining that they're selling a card rather than trading it.

Perhaps the most celebrated term is "Tipton" or "Tipton Mint." This is a tip of the hat to one of the earliest members of OBC Larry Tipton (still a member after nearly 20 years). Back in OBC's earlier days Larry made a name for himself for having some really worn-out cards and the term was coined.

Here's my own example of a Tipton from my collection. And this is a true Tipton, not because it fits the official OBC description...but because it was Larry himself who gave me this card: 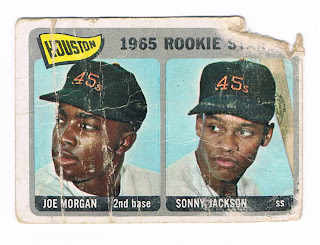 Of course, there's a story behind this. Larry and I were attending a card show together and he found a Morgan RC at a really great price. Telling me that the Morgan he owned was one of the "really beat-up" cards in his collection, he thought about buying it. As he stood there deciding whether to take it, I was quietly holding the money in my pocket, ready to spring on it if he turned it down. Finally, he agreed to buy it. Later, I explained that I was ready to take the card if he didn't, so he just sent me his old one.

Whether you cringe at the sight of this card or not (and you may not, considering what some have said about Joe Morgan as an announcer lately), I think it's a keeper with a superb provenance.
Posted by Chris Stufflestreet at 8:30 AM