I'm a fan of the Pittsburgh Steelers. I do realize that it's not exactly a brave thing to admit, but I became a fan of the team when I watched them win Super Bowl XIII and stuck with them ever since. Yes, they've won a lot of championships, but there were some years in the 1980s and late '90s that weren't exactly fun for the team's fans.

Here's a couple of cards I picked up recently. First, a 1968 Topps Test card of the Steelers: 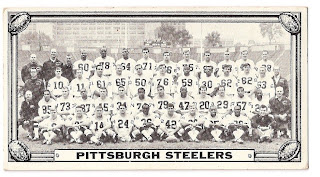 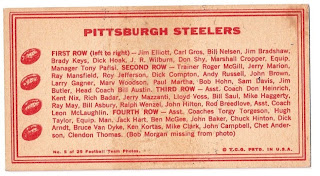 The second card was this 1968 Topps Test patch card: 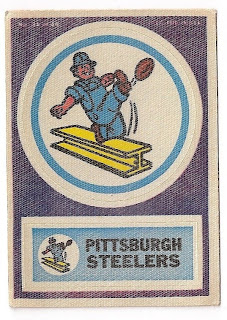 The '68 Test cards were on my wantlist for an awful long time, and I'm glad to cross them off.

There's a lot about these two sets that isn't known. As a test issue, it appears the two types were packaged together as there is some unopened material still existing. They may have been tested in the Washington, DC area but it's not known for certain. The team cards showed 25 AFL and NFL teams, with only the Cincinnati Bengals (an expansion team in '68 so no team photo was available) missing. The patch cards had 42 designs: each of the 26 teams' logos and 18 cards that had two letters or numbers.

I don't see a whole lot of these popping up. In fact, the first time I saw the patch card in person is when I opened the envelope this one came in.
Posted by Chris Stufflestreet at 8:30 AM