The year was 1951, and Topps was a new name in baseball cards. By that time, Topps was successful as a gum manufacturer, whose penny pieces of gum were a popular "change maker" at candy counters. Founded in 1936, the company followed the lead of several other gum companies and started producing cards shortly after the second World War. In 1948, a few retired baseball players were found in a set of novelty cards called "Hocus Pocus," and Topps also issued some college football cards with felt backs in 1950. Until 1951, the rest of Topps' card sets weren't sports-related (One set -- called "Freedom's War" -- showed scenes from the war in Korea).

Topps' long wait to start producing baseball cards was a good business move. The company was founded during the Great Depression and very few companies were able to do well in the market. Then, as the card business picked up again in 1941, Pearl Harbor was attacked. Many players volunteered for military service. Wartime rationing of paper and gum materials kept baseball cards from being produced. After World War Two ended, it took a couple of years to start the baseball card market again. By the late 1940s, there were two main gum companies: Bowman (known as Gum, Inc. before the war) and Leaf.  Bowman quickly won the competition and was the only national distributor of baseball cards in 1950.

There were two newcomers to the baseball card market in 1951. Berk Ross was only a minor competitor and would stop issuing cards after 1952. Topps didn't look like it was going to be a major competitor either.  It issued five small novelty sets of baseball cards that year and even issued them without gum in order to avoid any direct competition with Bowman. Despite being the company's first baseball card sets, they've been deemed inferior by many and sadly relegated to obscurity by those who tout the 1952 Topps set as its debut series.

Three of the sets Topps issued in 1951 had cards that were much larger than most collectors had ever seen. One set featured team cards; however, only nine of the sixteen major league teams were represented. Two other sets featured "All Star" players. One was made up of all-time greats (the "Connie Mack All-Stars") and the other was made up of current players (collectors refer to it as the "Current All-Stars" set). The cards in all three of these sets were the same size (2 1/16" by 5 1/4"), and hobby experts have debated for years about how the cards were distributed. The excellent Topps Archives blog has a great deal of info about these sets and their packaging.

The packaging of the last two Topps sets of 1951 isn't such a mystery to collectors today, thanks to a large warehouse find in the Philadelphia area during the mid-80s. As their names suggest, the cards are pretty easy to distinguish by the color of the ink on the back. Red Backs look like this: 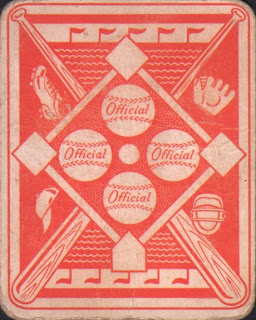 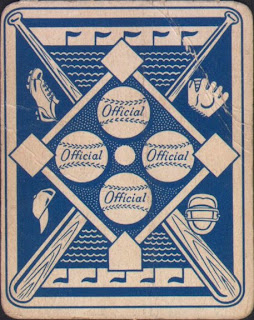 If you're looking for these cards online and the backs aren't shown, there's another way to know which set the cards belong short of emailing the seller ...look at the card number on Mel Parnell's card: 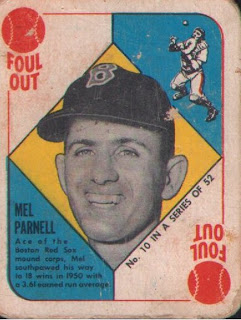 It says "No. 10 IN A SERIES OF 52" and while it seems to make sense as a sentence...look at this Red Schoendienst card: 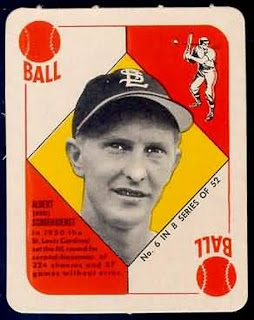 1951 Topps Red Back and Blue Back cards were issued in penny packs, with two cards joined together at one edge and perforated for easy separation. The top of Schoendienst's card above has four little nubs showing where it had been attached to another card at some point. In the warehouse find, a few Blue Backs were included in the packaging, suggesting either that the two sets were printed, wrapped and distributed together, or -- more likely -- that they used leftover Red Back wrappers before continuing with the new design. Generally, the wrappers that have been associated with Blue Backs makes mention of a piece of candy inside the wrapper, while the Red Back wrappers make no mention of any candy or gum.


Here's a wrapper used for Red Back cards, which clearly shows Blue Backs inside: 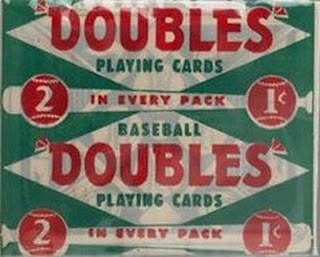 Display boxes that held these packs in the candy stores looked like this: As the box mentions, the Red Back and Blue Back sets were designed as a card game. Each card had a baseball term (strike, single, out, etc.), and each set had 52 cards. While the biggest difference between the two sets is the back color that gives each set its name, the main difference between collecting the two sets is the Blue Backs' relative scarcity to the Red Backs. The Red Back set features Hall of Fame members Yogi Berra, Phil Rizzuto, Ralph Kiner, Bob Feller, Duke Snider, Warren Spahn, Early Wynn and Monte Irvin (his rookie card), as well as variation cards of Gus Zernial and Tommy Holmes. The Blue Back set features fewer Hall of Famers (Richie Ashburn, Enos Slaughter, Red Schoendienst, Bobby Doerr and Johnny Mize).

It has been often stated in hobby circles that the 1951 Topps cards aren't really difficult to locate because the 1980s warehouse find flooded the market; however, you never see many available. Many modern price guides that list older cards fail to list them, and a growing number of collectors don't even know that Topps put out any sets before 1952. Whatever reason anybody uses to avoid it, the fact remains that the 1951 Topps Red Back set is one of the few sets from the 1950s that can be completed by a collector without laying out a whole lot of money.
Posted by Chris Stufflestreet at 8:39 AM