Last month, I ran a profile on the 1941 Goudey set. While that set is one of the lesser-known issues by the Boston-based gum pioneer, the company's 1936 set gets perhaps the least amount of hobby attention.

On my Vintage Baseball Cards website, I have written a page about the '36 Goudey set. What follows is a revamped description from that page, as well as some items from my own collection.

The United States was still trying to come out of the Great Depression in the mid- to late-1930's, and the design of baseball cards issued at the time began to show the effects. After three years of innovative and very well-designed sets, Goudey stepped back and issued what turned out to be its smallest baseball set in 1936. Not only did the set contain the smallest number of cards found in any Goudey baseball set, it featured a design that may have looked foreign when compared to the brightly colored pictures found in the company's sets from previous years. At the same time, more "premium" cards (larger-sized glossy photo cards) were made by card companies as a way of limiting production but seeming to improve quality. Whether this step back in design was a result of economics or from competition with National Chicle may have been lost to time; however, neither Goudey nor any other manufacturer would come out with a nationally-issued baseball card set in 1937.

While the wax wrapper was somewhat colorful: 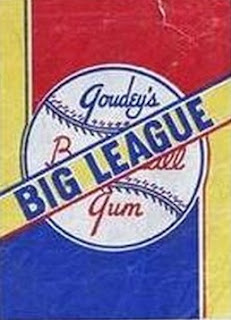 The cards themselves were devoid of color at all. The bright solid backgrounds of 1933 and '34 were gone, as were the brightly colored borders of 1935.

Goudey's 1936 issue contained 25 unnumbered cards. Card fronts feature a black and white player photo, surrounded by a white border and adorned with a facsimile autograph (not the player's signature, as all are in the same handwriting). As an example, here's Walter Berger's card: 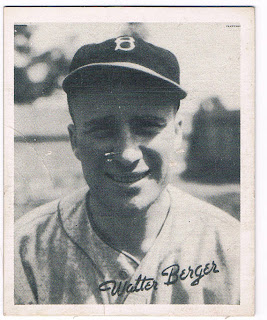 While it looks like Walter has a nose ring in the picture...it's actually a scratch on my card. Nose rings weren't yet fashionable in 1936 and wearing one could have led to what were then called "fisticuffs."
Card backs have a very short statistical write-up -- missing from the 1935 set, but much less than the info found on the backs of Goudey's first two sets -- along with instructions that could be used for some type of baseball game. The card backs actually contained two different possible plays, as seen on the back of Berger's card: 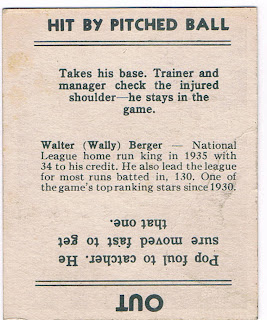 The progress of the game depended on which side was facing the top when the card was tossed down. As was the case in 1935, there are many front/back variations known to exist in this set due to all the different plays used for the game.

There really are no "key" cards to be found in this set, even with nine Hall of Famers present in these 25 cards. Babe Ruth had retired, Joe DiMaggio was only starting out in the majors, and Lou Gehrig -- so prominent in the 1934 Goudey set -- is not featured here. However, despite this set's status as the smallest and least valuable of all the major Goudey sets, it has been overlooked (or ignored altogether) by collectors, and its relative scarcity makes it a tough set to complete.

That said, I have several cards from the set in my personal collection. While many of my pre-World War Two cards are essentially type cards, I am only ten cards away from finishing my 1936 Goudey set. Being a smaller set helps considerably, as does the fact that many collectors and even sellers are unenthusiastic about it. Supply is actually quite low, but so is the demand.

I've explained in this blog already that I'm not exactly a condition-sensitive collector. That means that when I find a decent deal on a card that may have sustained damage, I'll pick it up merely to fill the void in my set. While fewer collectors follow that strategy with their post-WW2 sets like I do, a lot more pre-WW2 collectors are likely to do that since those cards are scarcer. Therefore, I end up with some cards that look like this Oral Hildebrand: 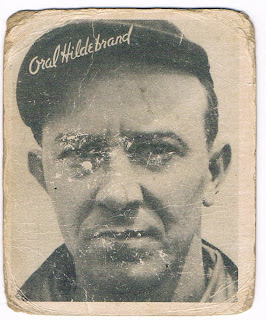 That's a card that certainly shows 74 years of age. Plus, I also have some cards like this great-looking example of a Yankee Hall of Famer: 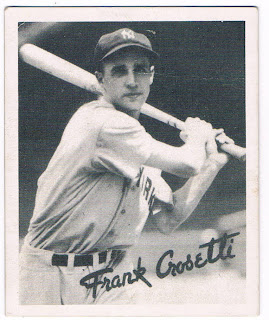 While this Crosetti card certainly looks good, it was a bargain for me because the back looked like this: 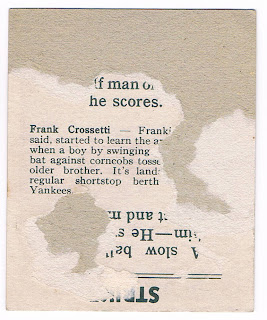 That's okay, though. I can always upgrade...the ones I've upgraded in the past -- like a Jimmy Dykes with trimmed borders -- have quickly found new homes with other collectors also eager to plug holes in their collections. That's one of the things I love most about this hobby; it's big enough for all types of collectors, and there are many different approaches to building a collection. Some hobbyists are particular about condition and strive for perfection, while others are just happy to have anything, even if it may not necessarily come in one piece. Most of us fall somewhere in the middle of that spectrum.
Posted by Chris Stufflestreet at 8:30 AM

Email ThisBlogThis!Share to TwitterShare to FacebookShare to Pinterest
Labels: 1936 Goudey