Excuse the slight swerve from my usual vintage focus, but I would like to direct attention to a very well-written opinion about the modern hobby. The National convention last week kicked up a bunch of discussion about the hobby, which always seems to happen just after the largest card show of the year packs up.

On Tuesday, the Sports Cards Uncensored blog ran an article about the state of the hobby. It was a balanced article, listing five good things and five bad things about the hobby's direction. Here's a list of his points:

Rather than recounting the article, I suggest reading it for yourself, along with the comments. I do have a few points to make, however:

I sincerely hope more serious attention can be given to the online collecting community. While this blog tends to stay nostalgic and somewhat humorous, there are some very good blogs focusing on hobby happenings -- A Cardboard Problem, Stale Gum, Voice of the Collector and others -- that I try to read daily. They don't get linked from this blog since they are mainly focused on modern cards, but their reports on the pulse of the hobby help keep collectors informed about what's going on.

About the money aspect..."what is this card worth?" seemed to find its way into an awful lot of the questions in the Q&A section of the several hobby magazines I read even back in the 1980s. That part isn't new at all. As for the assertion in the comments that the era of cards as a kids' hobby ended when Upper Deck arrived with their $1 foil packs in 1989, that's not entirely accurate. While trading cards was a kids' pastime through the 1970s or so, it was adults (namely, adult Baby Boomers) who fueled the Hobby Boom once they started acquiring those cards their mothers tossed out. So the argument that the hobby had been taken away from the kids is an old one.

Sadly, there just doesn't seem to be any real effort by the card companies to make cards palatable to young collectors. But from a business standpoint, why worry about kids' pocket change when adults are willing to hand over several dollar bills?

That was a rhetorical question, by the way.

The point about the lack of creativity in card design is well-put. When I was a kid, it was fairly easy to identify all the Topps issues going back to 1951 as well as the various Fleer and Donruss designs. However, when many collectors can't identify many of the designs among cards of the past 20 years (and I'm guilty of that myself) and the sets that mimic designs from decades ago like Allen & Ginter and Topps Heritage are more memorable than base sets, something isn't right.

In the comments section, I mentioned that when I was attending shows during the 1980s, there were many sellers who offered both vintage singles and cards from the current year's sets. Sometimes the new stuff was in commons boxes and the stars were available on the table, sometimes they had unopened wax packs on the table. For example, here's a picture from the August 21, 1989 edition of the Watertown Daily Times showing the brisk selling 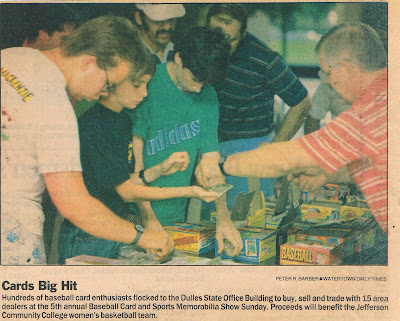 You'll notice that this seller has unopened wax for sale. What isn't seen in the picture are the single cards that were being looked through by the 16 year-old kid at the left wearing a Spuds MacKenzie shirt and a Swatch watch (which is me, by the way. While I'm not exactly proud to admit I was wearing a shirt promoting beer at that age, I just thought the shirt was cool). The cards were mostly 1980s but had some vintage mixed in.

However, the sellers today seem to be focused on vintage or modern, with very little overlap. That shows a disconnect that may make good business sense but doesn't seem to point towards a rosy future. 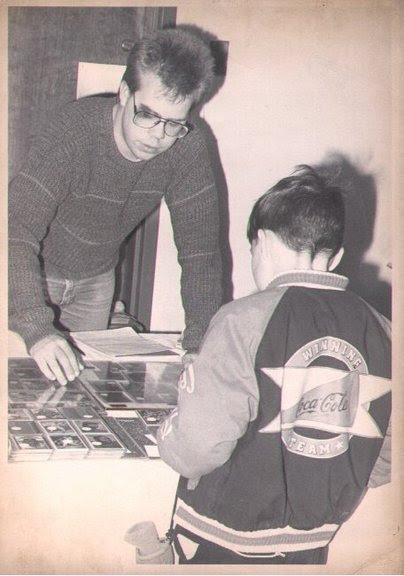 I say this as a person who once sold at Weekend shows. The picture on the right shows me in December 1989, at a show in the little town in upstate New York where I grew up. That's me in the sweater. I was 21 years younger than I am today, with more hair on my head and less girth around the waist.

While I'm showing off this picture, I'd like to point out one more thing. You might notice that all the cards visible have stickers on them. I made sure every card I offered was clearly marked with a price. Although those prices were negotiable, I took a few hours before every show to make sure each one was ready to be sold, allowing for condition. Also, if I bought or traded for a card at the show, a price was placed on it before it was placed on the table. There was no need to pull out the latest price guide whenever a customer asked, "how much do you want for this one?" I see that often at shows I attend and it annoys me to no end because it makes a seller appear unprepared. Sorry if you're a seller and I just described you; should I happen to visit your table, I probably won't spend much there. I'm more likely to walk away than wait for you to check out the book value. And I'm probably not the only one who'll act that way.

Okay, end of that tangent. Back to the SCU article.

While I'm in agreement with much of what was said in the piece, his last point settled in an uncomfortable place for me. Since I do not wish to take his statement out of context, here it is, lifted whole:

"Kids not collecting cards is not the problem. That’s pretty much it. That argument holds as much water as a generic brand baloon on a cold day. Kids are not the future of this hobby, casual sports fans are. When the collecting base is populated by as many twenty somethings as it is, the manufacturers should not be wasting their time trying to compete with XBOX and DVR. Kids are gone, and they are not coming back - at least until they start cheering for a sports team and buying their own stuff. Because that usually happens around age 16-20, that is where the focus needs to be. Kids spending 2 bucks on a base Topps pack at wal-mart is not going to drive the hobby to a point where it needs to be. Getting the billions of casual sports fans interested in buying AUTHENTIC autographs and memorabilia from their favorite sports players will."

If you read the comments section below that article, you'll know that I don't exactly agree with that statement. While I agree that young kids likely won't treat memorabilia cards kindly, saying that a lack of young collectors isn't an alarming trend is a little disconcerting. A lack of younger collectors now means fewer adults in 20 years looking to rekindle the flames of their old hobby. That won't be good for anybody still in the business two decades from now. And now that some of those Baby Boomers who began the hobby upswing 30 years ago are beginning to leave us, it's worth investigating a way to keep young collectors interested.
Posted by Chris Stufflestreet at 8:30 AM