This was a newsletter article I wrote in 2004, commemorating anniversary of Thurman Munson's plane crash. Today marks 31 years and I feel it should be shared again: 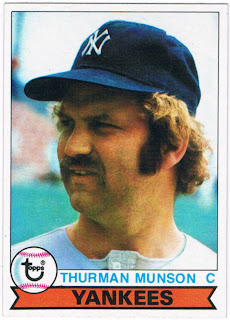 Yankee captain Thurman Munson was thirty-two years old. The official cause of death was given as smoke inhalation, and the coroner determined that he had died even before his friends tried to pull him out. He left behind his wife Diana -- his high school sweetheart -- and three young children, Tracy, Kelly and Michael. He also left behind 24 teammates, several coaches, the entire Yankee organization and a legion of fans.

Now that several years have passed, there are still a few vocal fans who want to see Munson enshrined in Cooperstown. They point out Thurman's resume: 1970 A.L. Rookie of the Year, 1976 A.L. MVP, three pennants, two World Series championships and the fact that he was the acknowledged "heart and soul" of those teams. However, in retrospect the Rookie of the Year award doesn't help Munson any more than it helped Fernando Valenzuela, Fred Lynn or Lou Whitaker. The MVP award is nice for a trophy room, but it didn't help Keith Hernadez, George Foster or (again) Fred Lynn get in the Hall of Fame either. Each award is given for an exceptional season, but to get in the Hall of Fame a player needs to put together an entire career.