Today marks the beginning of "The National," the annual sportscards convention. This year's event is being held in Baltimore and runs through Sunday. Although this National is closer to where I live than at any time since 1999, I am unable to be there this year.

So...instead of dwelling on the fact that I can't make this year's show, I'll take a glimpse at another show from the past.

The National has been held every year since 1980 and has rotated through several cities. The '80 show was in Los Angeles and would travel to Detroit, St. Louis and Chicago after that. The rules in place allowed several dealers to "bid" on the next year's show and the election would be held at the convention. The prospective sponsors would make their case before the assembled dealers and officers of the committee. Once the votes were tallied, the winner would be announced. For the fifth show in 1984, the event would be held in Parsippany, New Jersey. It was just across the river from New York City and widely hailed as the "New York National."

Attendees of that show were able to pick up this program: 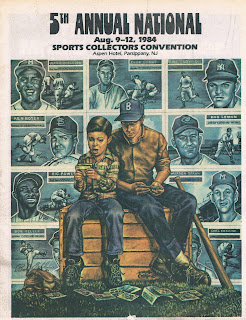 While the artwork featuring the '56 Topps cards is neat, the rendering of the two brothers sitting on a wooden crate and looking at their cards is awesome. I especially like the way they have the opened wax wrappers and extra cards tossed about the ground. For collectors like myself who were told to be extra careful with our cards to avoid damaging them, the picture is a glimpse into a different era.

The group that won the right to sponsor the '84 National are assembled in this photo from the program: 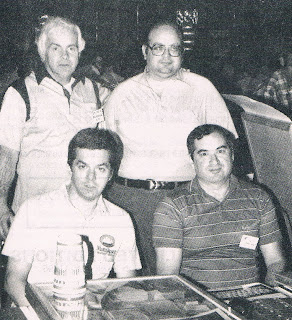 Standing are Tom Reid and Mike Gordon (a former contributor to The Trader Speaks and the man who sold me this program at a later National in Chicago). The two men seated are Mike Aronstein (the "MA" in TCMA, a company that printed collector cards in the 1970s and '80s) and Lew Lipset, author of The Encyclopedia of Baseball Cards and publisher of The Old Judge. (Edited to add: the program didn't give any photographer credit...but I've since discovered that this photo was taken by Frank Barning of Baseball Hobby News.)

For those who haven't been to a National, it's worth going just to see the stuff on display. Along with the cards, memorabilia from sports and entertainment are available, autograph guests sign throughout the weekend and many hobby names will be on the floor. While attending other Nationals, I've met Penny Marshall and Dr. Jim Beckett walking the floor as collectors and even Howard Bedell, who was on a 1962 Topps card as a player.

In the case of Howie Bedell, he walked up to a table, looked at a binder with some 1962 Topps cards in it, found the one with him on it and asked the seller, "is this one even real?" The seller assured him that it was authentic, especially for a "no-name" player. Bedell handed over his business card and said something about how that was certainly not a "no-name" player. Perhaps noticing that I (standing 4-5 feet away) was chuckling to myself over what I just saw, Bedell have me a slap on the shoulder and asked me how I was doing. Meanwhile, the seller was asking him if he'd do the honor of signing his card but Bedell politely declined. I actually enjoyed being there for that, if only to see a seller get reminded of the importance of not automatically downgrading a player on a card.

One thing that I wish would still be a part of the convention is a series of seminars. For one day, many subject matter "experts" would discuss a topic for an hour. The '84 National program had a list of the schedule: 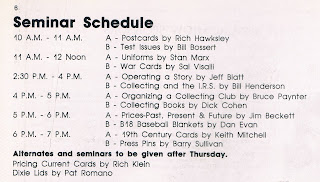 The schedule shows a wide range of interesting topics that could hold somebody's interest. While "Collecting and the I.R.S." doesn't seem like it would be good for anything besides catching up on some sleep, Bill Henderson is always good for some stories about the way things used to be in the hobby (I always seem to hear something new from him each time I speak with him). An oratory about prices by Dr. Jim Beckett -- remember, this was before he had started his price guide -- also had potential. My introduction to 19th century baseball cards was a book co-written by Keith Mitchell; that would have been a neat discussion to sit in on. I'll also mention that Rich Klein is still active with The National and posts on Net54. He usually has a table near the show entrance; if you can get to this year's show, stop by and chat with him for a moment (and tell him I'm sorry I couldn't make it this time).

Another feature of the National was a luncheon. In recent years, there have been several groups that have luncheons and dinners with interesting speakers from auction houses and grading companies, but none are officially recognized by the National committee. In most cases, you need to belong (or know somebody who belongs) to a group to know about them. However, here's an event that was listed in the '84 program: 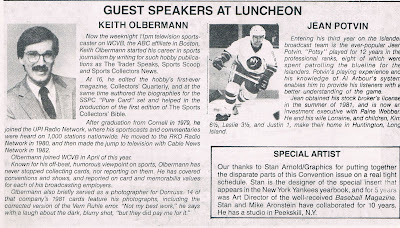 Having lost that very 80s-vintage mustache long ago, Keith Olbermann is known today as a national political commentator for MSNBC and former ESPN Sportscenter host. As a teen in the 1970s he was quite active in the hobby. He wrote the text that shows up on backs of the underappreciated 1976 SSPC set (printed by TCMA, mentioned earlier) and even took some photos that wound up in the 1981 Donruss set. At the time of the '84 convention he was the sports guy for the nightly TV news in Boston. Jean Potvin was likely added to help skew the baseball focus that most hobbyists had; however, he was a member of the Islanders teams so popular in the New York area at the time and likely had some colorful insights.

As for autograph guests, the list is rather short and includes mainly players who were local:

While many of these former players are now deceased, there's a definite lack or "star quality" that marks shows like this today. For an example, compare this list with the schedule of autograph guests at this year's show. That might be due to the fact that in '84, these autographs were included in the admission price. Today, all autographs are a separate fee and even the VIP package sold to collectors only includes a limited number of free autographs.

Another thing missing from current National programs that should be there are articles. Fortunately, the 1984 program has several, like this one:

This article explains the battle between Topps and Bowman, both in the candy stores and in the courtrooms. Other articles cover Barry Halper's collection, the first National in '80, world series rings, collecting nonsports subjects and different methods of collecting. Compare that to the program for 2009's National in Cleveland, which consisted of a directory of sellers and advertisements from sponsors but no reading material. I kept a program for my collection, but was disappointed to see what wasn't included.

Though I'm not able to make this year's show, I'm looking forward to being there next year in the Chicago area.
Posted by Chris Stufflestreet at 8:30 AM