When Words Come Back to You...

Following up on Monday's entry about 1953 Topps...

While I'm still relatively new to baseball card blogs -- this one started just this April -- I've known a few bloggers before by way of being a longtime collector. One of the guys I've known for years is Mattew Glidden of the Number 5 Type Collection since we're both members of an online trading group called OBC (Old Baseball Cards).

OBC may seem like its own secret society of collectors. We go to shows wearing a special hat, some dealers even give us special offers and there's even a super-secret group handshake. The group is a great collection of old-school hobby guys who are more into the cardboard and stories than they are about things like investment value and pop reports. You can bet that every person in the group is crazy.

Crazy, that is, about their cards! Seriously, if you're into older cards and are looking to work on pre-1980 sets and don't mind getting cards that might look like some of the ones I show here, you should check out the collectors listed on OBC's membership roll. You'll know they're decent collectors and will deal with you fairly.

(Putting away the recruiter badge and remembering I was writing about another blogger...)

Back in May, the Number 5 Type Collection had this post about 1953 Bowman cards. I made a comment about the back and the way blank spaces were left for 1953 statistics so their owners could fill in that player's numbers for the year. Mentioning that I've never seen any that were ever filled in, this card was posted there: 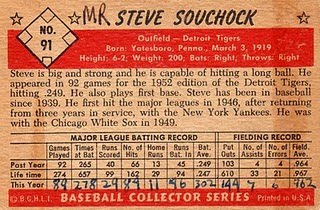 Not just Steve Souchock, but Mister Steve Souchock. Impressive. Now I've seen a '53 Bowman card that has been filled in and can go on with my life without ever saying something like that comment again.

Fast forward three months. What appears in my mailbox but these:cards: 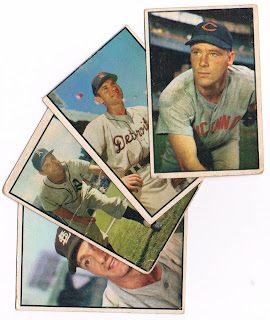 Mr. Souchock and three of of his friends and fellow players. Three of the four cards have the stats filled in, with the card on top (Herman Wehmeier) also being a "Mister."  Cool stuff, thanks for thinking of me Matt!
Posted by Chris Stufflestreet at 8:30 AM