This one comes from Alex:

Q: "I recently bought a violin at a flea market and at the bottom of the case, I found an autographed 1954 Billy Hunter card, and I was wondering how much it would be worth." 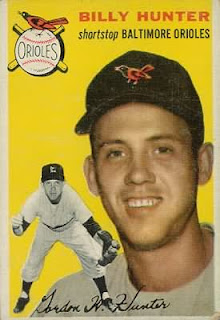 A:  You didn't say whether the Hunter was a Topps or Bowman card, but both 1954 sets had an autograph in their design, so what you see is likely a facsimile. Topps included an autograph wherever it fit into the card's design, which for Hunter's card was along the bottom. Bowman used a solid-colored box in its set design that contained a player's signature. While a few cards were given block letters instead, Hunter's wasn't one of them. 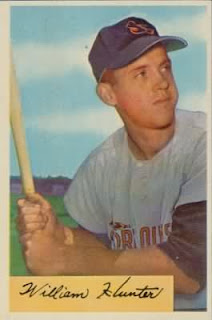 Interesting that Hunter's signature is actually different on each card. Topps has his sig as "Gordon W. Hunter" while Bowman shows "William Hunter." The W and the last name are similar on both cards, but perhaps he signed his contracts differently for each company as a result of the battle between the two companies about which one had the rights to certain players.

Common 1954 cards in VG-ish condition (or, what you'd expect for a card that has been in a violin case for years) usually fetch about $2 or so at card shows.
Posted by Chris Stufflestreet at 8:30 AM