I received a package in the mail that I really appreciate. I would have really loved to have it here last week, though, because a couple things would have fit in so well then. I'll explain:

A trading buddy (who is not another blogger) sent along these cards in exchange for a 1941 Play Ball card:

They're not pretty, but every step closer toward the 1952 Topps set is a positive direction. But there was a significance to this package: these four cards took my wantlist for the set down to 202 needed. These cards moved me past the halfway point, which is huge. I do realize that the set is beginning to get an awful lot harder to add to (I still have 95 high-number cards and a lot of Hall of Famers to pick up), but I'll keep looking to get more when I can.

The card at the left features Leo Kiely of the Red Sox. Last week, I mentioned him as the first American-born player who wasn't ethnically Asian to play professional baseball in Japan. That card would have been a great image to place in the blog entry.

Ryan also sent this card along as a surprise: 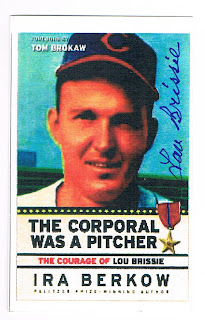 It's a business-card sized reproduction of a book cover, signed by former player Lou Brissie (also a player in the 1952 Topps set). If you aren't familiar with Brissie's story, it's an interesting one. He was one of many baseball players from all levels who served in the military during World War 2. In December 1944 he was serving with the Army's 88th Infantry division in Italy. One night, his unit came under fire from German artillery. One of the shells shattered his tibia and shinbone.

Brissie was evacuated on a stretcher and sent to a field hospital, where the doctors considered amputating his leg. Somehow, Brissie managed to convince them to save it during the operation. It took two years and 23 operations, but he regained enough strength to play baseball again. He was signed by the Philadelphia A's and made the big leagues in 1947.

Had I been able to get this last week, this could have been a great thing to show on Veteran's Day. Overcoming that kind of an obstacle is a story that's worth being told. If this has interested you in the book, here's a link to check it out on Amazon:

And many thanks to Ryan for sending this stuff my way.

And...while we're on the subject of trades...Here's an offer that ties into Monday's post about my oldest card.

A while back, I had a post showing some of the gems I have in my duplicates box. Here's the picture from that post:

Two 1952 Topps and one 1953 Topps, which have been given an after-market adjustment by a young owner and a pair of scissors. I'm looking to find some good homes for them. These are open -- for free -- to anybody who wants one. I'm not even asking for anything in return for these.

There's a catch, though: this must be the oldest card you own when you get it.

Simply leave a comment indicating which one you want. It there are three comments (or only one for any particular card), I go in order of the first post. If there are more than one people claiming any of these cards, I will use another time-honored method involving paper, scissors and a hat (and let my daughter do the honors).


Additionally, I'll even give one extra chance to any blogger who lets me know he's listed a link to this giveaway in their blog (leave a comment about it or send me an email so I know, and tell me which card you want). And since this blog isn't always the first thing anybody reads, I'll give this a few days to run. The cutoff is 6:00 P.M. Eastern time on Sunday, November 21. I'll announce the winners on Monday.
Posted by Chris Stufflestreet at 8:30 AM

Email ThisBlogThis!Share to TwitterShare to FacebookShare to Pinterest
Labels: 1952 topps