Not Just a Computer Brand

Among oddball issues from the early 1970s is the Dell Stickers. While the name Dell today might remind us of a brand of computers and maybe even the "You're getting a Dell, Dude!" pitchman, it's also the name of a publishing company that is today a part of Random House.

In 1971, they issued a series of 25 booklets about baseball players. There was one book for each of the 24 major league teams in existence and one All-Star booklet. The cover looked like this one: 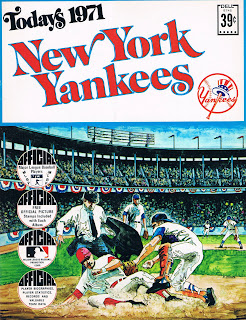 Each team collection was available separately, and also in groups. They could be purchased as division sets, where each team in a division would be represented (the A.L. East would consist of the Red Sox, Tigers, Indians, Brewers and Orioles as well as the Yankees then). All four divisions -- plus the All-Star book as a bonus -- were available via an order form included in the book (cost: $5 including shipping, which is less than just what the S&H would set you back for such a package today).

One page toward the back featured an advertisement for the full series: 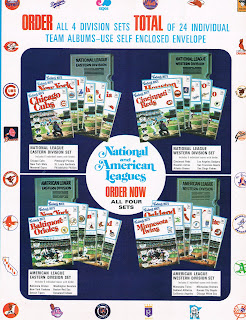 Inside the book, there were two sheets of stamps with 12 players each, some statistics for every player featured on a stamp, a full 1971 game schedule, a basic history of the team and some of its past stars.

By 1971, the Yankees were a shell of their former selves, with several names that aren't remembered by many fans of the team at all: 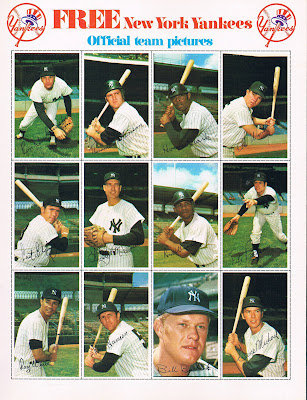 There are some names here: Thurman Munson is the second player in the top row, while Roy White and Gene Michael show up in the bottom corners. 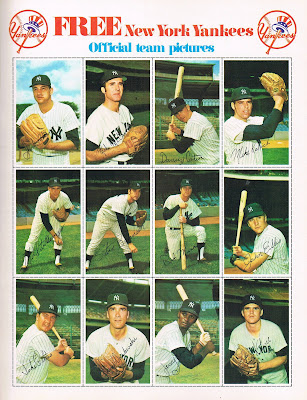 On the second sheet, Mel Stottlemyre and Bobby Murcer appear in the middle row.

Considering these were the types of items that were sold in school book fairs and other methods directed at school-age kids, they won't provide a treasure trove of information. Nor are they ever going to be a high-dollar investment item. However, as something designed to be torn apart and stuck to things...and sold to the very people who had no problems doing just that, it's neat to see that this one managed to survive nearly 40 years unscathed.
Posted by Chris Stufflestreet at 8:30 AM

Email ThisBlogThis!Share to TwitterShare to FacebookShare to Pinterest
Labels: 1971 Dell