Yet Another Card With "Character"

Since I've been doing this blog, I've occasionally shared some of the cards I own that are...how do I say this...

They're not exactly investor-grade material.

(This is where long-time readers roll their eyes and say, "No kidding!")

And here's one of those cards: 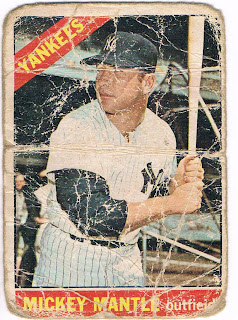 Mickey Mantle cards are quite expensive, due to him being a legend among Baby Boomers (especially with the ones that fueled the Hobby Explosion in the 1980s). He may not have been the best player of his era -- I think Willie Mays was better all-around, Hank Aaron hit more home runs, Jackie Robinson was the bigger hero and Sandy Koufax rates high as well -- but he's still the biggest Hobby name even 15 years after his death. Don't get me wrong, he was a great player. And being a Yankee great certainly didn't hurt his stature.

But...when you aren't looking to spend a lot of money, sometimes you have to be content with a card that looks like a road map of his native Oklahoma.
Posted by Chris Stufflestreet at 8:30 AM