This post concludes my weeklong rambling about Topps Playoff and World Series cards from the 1970s. There have been generic themes that can be applied to each part: Monday's post featured three straight years where the Baltimore Orioles went to the World Series, while Wednesday's post had the three years of A's World Series dominance.

As for today...it's the years where Topps got chintzy. In the beginning (going back to 1960), all World Series subsets featured a card for each game, plus a Series recap that showed the winning team celebrating. When the playoff rounds began, Topps did the same thing for them. However, in 1972, the League Championship Series were pared down to a single card each.

In 1976, Topps went even more extreme. They made one card for both LCS. 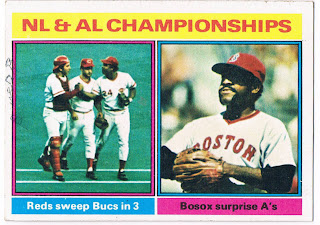 Card #461 -- AL & NL Championships
The cards say it all, the Reds swept the Pirates in three games, while the BoSox knocked off the three-time champs in what was also a sweep. That set the stage for a Reds/Red Sox series, one that was actually a well-played, seven-game nail-biter that featured a Carlton Fisk home run that is still shown repeatedly in retrospectives.

So, Topps would have had a great Series subset, except they chose to do this: 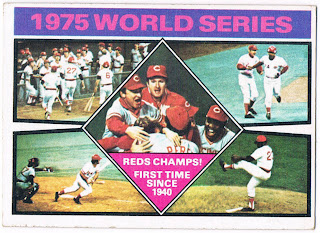 Card #462 -- 1975 World Series
That's it. The entire World Series represented on a single card. The Reds win for the first time since before World War Two. Carlton Fisk "waves" his long fly ball fair in the 12th inning. Tony Perez takes an eephus pitch from Bill Lee and knocks it into the seats. Every game had its share of drama, as only a Red Sox postseason series at the time could. All represented by a single freakin' card.

And I'm a Yankees fan saying this.

At least the top left corner shows #27 heading back to the dugout after hitting that shot that won Game 6.

In 1976, another well-remembered home run marked a Championship Series: 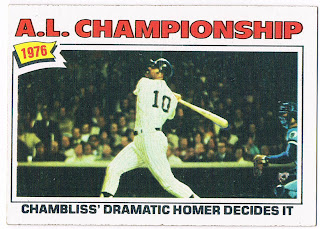 Card #276 -- Chambliss' Dramatic Homer Decides it
What you see in this picture is a crack of a bat and a shattering of the dreams of countless Royals fans. It was also the first time the Yankees would make it to the postseason in a dozen years. It was a dramatic series that went a full five games and right down to the last at-bat of the deciding game. Yet, despite all the collectors who say Topps is pro-Yankee, this would be the perfect place to resurrect the "complete series" subset. But, no...this was it. But what a card it is. 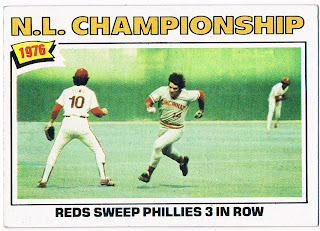 Card #277 -- Reds Sweep Phillies 3 in Row
There's "Charlie Hustle" showing how he earned the nickname. Also shown are a great fielder (Garry Maddox) and a very capable shortstop (Larry Bowa), doing what they do best. A few years later, they would all be teammates and won a World Series together.

This set the stage for a Yankees/Reds World Series. It was a sweep by the Reds for a repeat, but this time, Topps chose to make a three-card subset of the Series (not numbered with the LCS cards, though): Card #412 -- 1976 World Series
Two pictures of Johnny Bench make up this card, and both show Yankee Stadium's third base line. One shows him getting ready to take on Thurman Munson, while the other shows him rounding third on his own after a home run.

For 1978, Topps went with a single card for each LCS and reverted to a single World Series recap card. 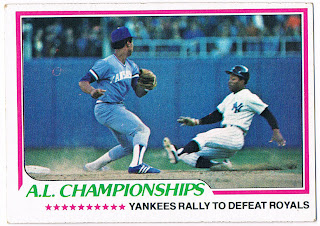 Card #411 -- Yankees Rally to Defeat Royals
This card features Mickey Rivers sliding into second as Frank White steps out of the way.

The 1976 ALCS opponents met again in '77 with the same end result...Yankees in five. And for the second year in a row, the Yankees won it in their final inning, just not as dramatically as Chambliss' homer. 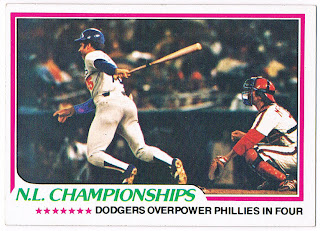 Card #412 -- Dodgers Overpower Phillies in Four
On this card, Davey Lopes is running out a ground ball while Tim McCarver watches.

Game 1 of the '77 NLCS would be the first time the Phillies had won a postseason game since 1915. From that point, the Dodgers ran the tables and took the pennant in four games. It set up a rematch of the 1963 World Series, a case where Dodger fans definitely hoped history could repeat itself. Unfortunately, they had to deal with this guy: 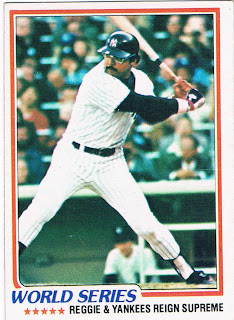 Card #413 -- Reggie & Yankees Reign Supreme
I've already mentioned here about the significance of this card to me. It was the very first baseball card of any type I ever owned. It tips its hat to Reggie Jackson's feat of hitting five home runs in a single Series.

In 1979, I was beginning to collect cards from wax packages. Since the Yankees won the '78 Series as well, I was looking forward to seeing those Series cards as well. However, they never showed up in my packs because Topps never printed them.

What a disappointment. Just as I was getting into collecting, Topps took away some of the stuff that older kids enjoyed: World Series cards, Rookie All-Star trophies and multi-player rookie stars cards with color. They would all eventually come back (rookie cards in color from 1980-'82, World Series cards but only in '81, the Rookie All-Star trophy in '87), but I personally felt cheated.
Posted by Chris Stufflestreet at 8:30 AM