For the final post of 2010, let's make sure we get a police escort to help usher out the year...

"What exactly are Police Cards? I see them listed but never saw one. Were they given out by local police departments?"

As a Steelers collector, I happen to have some Police cards. Here's one from 1985: 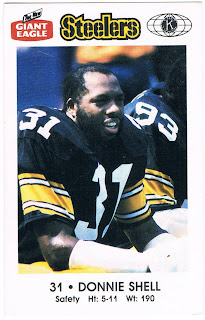 As you can see, these cards were sponsored by both the Giant Eagle supermarket chain and the Kiwanis club. It's a fairly basic team issue, with the Steelers' name above the photo and some vital info below. The backs look like this: 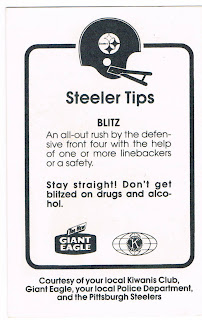 There's an explanation of a football term, but other year's cards featured positive things a player has done, such as finishing a college degree or winning an award. In bold font, a message for the owner of the card appears below that. This card says to avoid getting mixed up with drugs and alcohol, but others suggested staying in school, keeping safe and staying out of trouble.

Police cards were a joint effort among teams, businesses, community organizations and the police departments. Most of these cards were made and issued in the 1980s. A lot of them were football cards, but several baseball teams took part in the outreach as well. They were generally given to officers, who them distributed them to kids they encountered. In a way, they were meant to encourage kids to approach officers, rather than scatter whenever one showed up. Since they're found fairly easily as team sets, it appears many were siphoned off to dealers -- card dealers, not the unsavory dealers the police generally looked for -- instead.


Sadly, the Police card sets have seemed to stop since sometime in the early 1990s. They could still serve a purpose.
Posted by Chris Stufflestreet at 8:30 AM